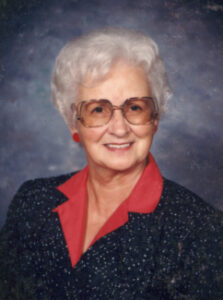 Catharine “Katie” Lee, 88, a former resident of Plymouth, died at 10:40 a.m. Monday at Heritage Health in Peru, Illinois.
Katie was born in Akron, Indiana, the daughter of Burr and Mary “Beam” Day. Katie moved to Plymouth in 1931 where she attended Lincoln High School.
On September 8, 1943 in Plymouth, Katie married Virgil Lee. Virgil died on October 12, 1982. She was employed by Bosworth’s Bridal Shop in Plymouth for 25 years.
A member of Trinity United Methodist Church in Plymouth, Katie attended church with her daughter and family in Peru. Her hobbies were sewing, oil painting and reading.
Surviving is her daughter, Mary (Ronald) Burdon of Peru, IL. Four grandchildren also survive they are; Mark A. (Pam) Lee, Scott D. (Dolly) Lee all of Plymouth, Steven (Tori) Burdon of Carmel, IN and Stephanie (Doug) Jeffirs of Aurora, IL. Nine great-grandchildren and one great-great granddaughter also survive. Preceding in death were her parents, her husband, Virgil, her son David and daughter-in-law Janet Lee, two sisters: Julia Cramer and Doris Daum and a brother Dale Day.
The family will receive friends on Friday, February 10, 2012 from 4 – 7 p.m. in the Johnson-Danielson Funeral Home, 1100 N. Michigan St. Plymouth. Funeral services will be held in the funeral home on Saturday, February 11th at 10:30 a.m. with Pastor Kerry O’Brien presiding.
Burial will be in New Oakhill Cemetery Plymouth.
Memorial gifts may be given to the charity of the donor’s choice.