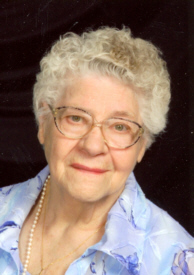 Catherine A. Haeck, 94, and Plymouth resident all her life, passed away in her home on Monday, January 02, 2017.
Catherine was born south of Plymouth in her family home on October 21, 1922 to Francis and Frances R. (Smith) Houin.
On January 30, 1945 in St. Michael Catholic Church, Catherine became the bride of Joseph Haeck. He would precede her in death on April 11, 1998.
A devout wife, mother and homemaker, Catherine was always on the go with things to do. Her husband and she raised 7 children on their family farm. For a short while, she did work at Wagner Wire and Hehr.
A devout Catholic, Catherine was involved in the Rosary Society at St. Michael Church and the Harvest House.
She is survived by her children: Carolyn (Fred) Costello-Kuehl of Valparaiso, Paul (Vicki) Haeck of Texas, Dennis (Kam) Haeck of Mishawaka, Neal (Shon) Haeck of Inwood, Jerry Haeck of LaPaz and Dale Haeck of Valparaiso; 15 grandchildren; 23 great-grandchildren; daughter-in-law, Mary Haeck of North Manchester; her siblings: Lawrence (Frances) Houin and Theresa (Lloyd) Anderson; and sister-in-laws, Betty Houin and Marilyn Houin.
Catherine was preceded in death by her husband, parents, son Roger, and siblings: Irene (Bob), Elmer (Lena), Sister Mary Francis, Carl (Pauline), Leo (Mary) and Bernard.
Visitation will be held on Thursday, January 5, 2017 from 4-8 PM in the Johnson-Danielson Funeral Home, 1100 N. Michigan Street, Plymouth, IN 46563. A Rosary will be recited at 7:30 PM.
Mass of Christian Burial will be held at 11 a.m. on Friday, January 6, 2017 in St. Michael Catholic Church, 611 N. Center Street, Plymouth.
Burial will be in the New Oakhill Cemetery.
Memorial contributions can be made to St. Michael Catholic Grade School, 610 N. Center Street, Plymouth, IN 46563.