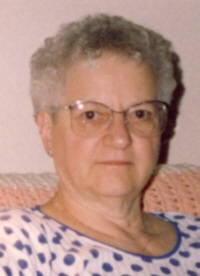 Catherine Bradfield Olson, 87, a long time resident of West Township and Plymouth passed away on Friday February 9, 2012, at Miller’s Merry Manor in Plymouth.
Catherine was born on November 26, 1924 in Mishawaka, Indiana to Richard and Orpha Hoover Burkett.
On October 30, 1943, Catherine married Virgil Bradfield, who preceded her in death in 1972. She later married Clarence Olsen, on November 15, 1975 who preceded her in death on June 19, 2011.
Catherine was postmaster at Donaldson from 1961 to 1986. She was a retired member of NAPUS (National Association of Postmasters of the United States), Past Worthy Matron of Plymouth Chapter 26, Order of the Eastern Star, Past Mother Advisor of the Plymouth Rainbow Assembly, and a member of the Evangelical Covenant Church of Donaldson. She is survived by sons Bryan (Penny) Bradfield of Plymouth, IN; Ted (Kathy) Bradfield of Indianapolis, IN; Bob (Jody) Bradfield of Moline, IL; daughter Sheryl (Mike) Caslow of Donaldson, IN; stepson Vern (Erin) of Frisco, TX; 13 grandchildren and 16 great grandchildren survive as well.
She was preceded in death by her husbands, parents and a stepson S. W. Farrar.
Friends will be welcomed by the family on Monday February 13, 2012 from 4 to 8 p.m. in the Johnson-Danielson Funeral Home 1100 N. Michigan Street Plymouth, IN 46563. An Order of the Eastern Star service will be held at 7:30 p.m. in the funeral home.
Funeral services for Catherine will be held on Tuesday February 14, 2012 at 11 a.m. in the funeral home. Pastor Mark Harder, current pastor and Pastor Denise Anderson, former pastor of the Evangelical Covenant Church, Donaldson will officiate.
Internment will follow in the Oakhill Cemetery, Plymouth, Indiana.
In lieu of flowers memorial contributions in memory of Catherine may be given to the Evangelical Covenant Church, P.O. Box 67, Donaldson, Indiana.