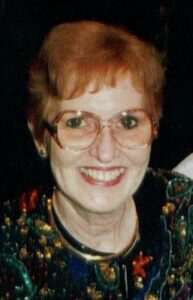 Catherine Mary Cardiff “Kay” Flynn, beloved wife, mother, grandmother, aunt, sister, and friend, died July 1, 2007, at the age of 78 of natural causes.
She was preceded in death by her husband, Patrick Joseph Flynn, Sr., who passed away in 2006; two infant sons; her parents, Anthony and Ellen Cardiff; her older brother, William; and her younger sister, Theresa Conway Felski. She is survived by her youngest sister, Mary Ellen Cardiff McNicholas, six children, 18 grandchildren, and two great-grandchildren.
Kay was born to Anthony and Ellen Cardiff on December 28, 1928, in Chicago, Ill. She attended Providence High School and DePaul University before beginning a brief career at WGN in the Wrigley Building. Her beauty and sophisticated sense of style were cultivated during her vibrant youth in Chicago, where she participated in several pageants and was named the DePaul University Charity Ball Queen in 1946.
In 1950, a friend, Bob Smith, introduced her to her future husband, Pat Flynn. Pat, enamored of her gorgeous red hair, feisty personality, and mischievous sense of humor, asked her to become his wife after a short courtship. They married on October 27, 1951, at St. Genevieve’s in Chicago. During their 55-year marriage they welcomed six healthy children into their family: Kathleen, Michael, Patrick Jr., Daniel, Thomas, and Mary. The six children and their loving spouses, Christopher Fox, Barbara Brems, Laura Brems, Sarah Klein, Kelsey Chipman, and Joseph Boener, gave Kay and Pat 18 grandchildren and two great-grandchildren: Chuck, Melissa, Caitlin, and Chelsea Fox; Erin, Michael, and Kara Flynn; Lauren, Megan, Catherine, and PJ Flynn III; Sean, Connor, Matthew, and Mary Kate Flynn; Katie, Thomas, and Daniel Flynn; and Kathy and Ellen Boener.
Kay’s passionate love for her husband and family took her from Chicago to Texas to North Carolina to Michigan during her first nine years of marriage. The Flynns finally settled in Plymouth, Ind., where Kay managed the house—and attempted to manage her lively brood—while Pat traveled for work. In 1969, Kay and Pat, both entrepreneurs at heart, partnered to create Flynn Industries, later Carlynn Enterprises, and its major holding, Shamrock Homes. Their goal was to create elegant, custom-made, and affordable manufactured housing. Today, the business thrives under the leadership of their four sons.
As her children grew, Kay nurtured her innate creativity and, with the guidance of the Poor Handmaids of Jesus Christ at Ancilla College, became a prolific artist. She mastered a number of media including oils, watercolor, enamel, silk, candles, and calligraphy. She fashioned hundreds of treasures, joined the Heartland Artist Society, and opened a gift shop named Seventh Heaven. Ever the fair businesswoman, she’d sell her works to relatives at “the family discount” and conduct Christmas gift-giving by lottery.
A trusted girlfriend, Kay often hosted her bridge club at her home and was a member of Tri Kappa Sorority and the Red Hatters in Plymouth. She led by example; her family’s faith and sense of ministry resulted from Kay’s volunteer work, her membership in the Altar Rosary Society, and her service as a Eucharistic Minister. In 1993, the Flynns’ long-standing tradition of generosity was realized in the formation of the Flynn Family Foundation. The Foundation supports men, women, children, and families in crisis.
Kay, nicknamed “Craze” by her children and “Grammy” by her grandchildren, adored exotic travel, smart films, and a good read, but loved family above all else. She called each of her children and grandchildren her “favorite” and declared “I love you” with every good-bye. She believed in straight posture, big smiles, and can-do attitudes. Her integrity, faith, and forthright sense of independence live on in her children and grandchildren, who will miss her deeply and celebrate her always.
In lieu of flowers, memorial contributions may be made to St. Michael’s Parish and School, 612 N. Walnut St., Plymouth, Ind. 46563 or to the Poor Handmaids of Jesus Christ, P.O. Box 1, Donaldson, IN 46513.
A Mass of Resurrection will be held at 11 a.m. EDT Saturday, July 7, in St. Michael Roman Catholic Church, 615 N. Center St., Plymouth, where Kay was a longtime parishioner. Visitation will precede the Mass from 9 a.m. – 10:30 a.m. in the church. Interment will be at St. Michael’s Cemetery, Plymouth.