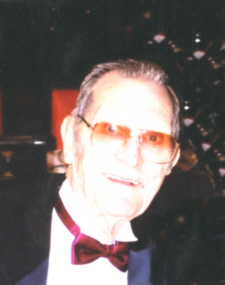 Cecil Milo Smith was with his children and their spouses when he passed away on January 3, 2009, at Miller’s Merry Manor in Plymouth. He was born to Ralph and Matilda Smith (both deceased) in Plymouth, IN on November 20, 1922. Cecil was a veteran of WWII having served in Italy and Africa. He married Yolanda Nyers on December 30, 1950 (Yolanda passed away September 7, 1990). Cecil and Yolanda had four children; Marty (Jacqueline) Smith, Susie Smith, Pam (Doug) Edwards and Sandy (Jim) Holderread. They also had eight grandchildren and nine great-grandchildren. On July 20, 1996, Cecil married Donna Goss who survives along with four stepchildren; Betty Uebelhor, Leo (Martha) Goss, Kathy (Kim) Masten and Sharon Reeves. He also had eight step-grandchildren and two step-great grandchildren.
Cecil had three sisters; Lucille (Ed) Klingerman (both deceased), Marceil (Ron) Dursky, Barbara (Richard) Mynesberge and two brothers; Kermit Smith and Gordon (Donna) Smith (all deceased). He also has numerous nieces and nephews.
Cecil was an avid fisherman and hunter in his younger days. He was a very creative person who painted beautiful landscapes and sunsets; he also wrote excellent poetry. He and Donna shared a passion for travel and enjoyed many wonderful cruises to exotic locations. Cecil had a great love of music and was an amazing dancer and harmonica player. A private family service will be held. Johnson-Danielson Funeral Home is in charge of the final arrangements. Please feel free to leave condolence messages for the family at: http://www.addiesstandardpoodles.com/Cecil_Milo_Smith.html