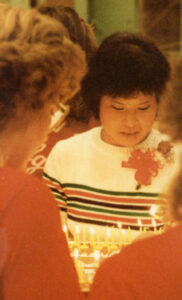 Chae Ok (Sim) Belkiewitz, 72, of South Bend and formerly of the Plymouth, Walkerton, and Michigan City areas passed away at her home Friday evening, January 4th. Chae has endured the effects of Parkinson’s disease for nearly ten years and dementia the past two while remaining in the comforting care of her husband Jim.
Chae Ok Sim was born on February 19, 1940 in Seoul, South Korea, to Bong Woon Sim and his wife, Chang Ah Gi. As a child she possessed great athletic skills and loved the game of Volleyball. She would become an Olympian in the sport and later shared those talents with Plymouth High School girls from 1978 to 1986 coaching them to play in two state finals, five semi-state appearances, seven sectional titles, and finishing with an overall record of 197 wins vs 37 losses.
Chae was a vibrant young lady, trained as a nurse, and lived in Seoul during the mid 1960’s when she met American Army serviceman, James A. Belkiewitz, a Spec 4 at a grade school where he was teaching English to Korean children. They fell in love and were married at Myong Dong Church on June 4, 1966 in Seoul. In October of that year, while living in the U.S., Chae attained her American Citizenship on August 20, 1970 in Fort Wayne, Indiana. The couple made their first home in Michigan City, Indiana where she was a nurse’s aide at St. Anthony Hospital. She then took a position in research and development at Arno Adhesive Tapes in Michigan City before joining the Zimmer Corporation in Warsaw as a production machinist where she worked for ten years until she was disabled in an auto accident.
Always a proponent of the American Red Cross blood donor program Chae achieved the 5 gallon distinction. On one occasion Chae was turned away for not meeting the minimum weight requirement, so the next month she filled her pockets with metal objects from work. Now passing the weight requirement she was able to donate; however, when she attempted this a second time they found her out and turned her away again.
While in Michigan City, Chae enjoyed league volleyball, softball and bowling. She also sang with the choral group, The Sweet Adeline’s. She is currently a member of the Michiana Korean Presbyterian Church in Elkhart, Indiana where she also sang in the choir.
She is survived by her husband, Jim, and their three children: David A. Belkiewitz of Cottonwood, Arizona; Angela M. Belkiewitz of South Bend; and Brian R. Belkiewitz of Sedona, Arizona and dear grandson, Vincent J. A. Belkiewitz also of South Bend.
Her siblings include Chae Soon Sim, sister, Seoul, Korea; Chang Hak Sim, brother, Seoul, Korea; Chae Suk Lee, sister, Treasure Island, Florida; Young Ju Sim, brother, Schererville, Indiana; and Chae Sung Sim, brother, Crown Point, Indiana. She was preceded in death by her parents, a brother, Chong Pae Sim, and a sister, Chae Chun Sim.
Visitation will be held on Friday, January 11th from 6 – 8 p.m. EDT in the Johnson-Danielson Funeral Home, 1100 N. Michigan St., Plymouth.
Visitation will continue on Saturday, January 12th at the Michiana Korean Presbyterian Church 29400 Co. Rd 10, Elkhart, Indiana from 4 p.m. until time of services in the church. Services will be held at 5 p.m. EDT in the church with Rev. Bong Joo Chun officiating.
Memorial gift contributions may be made to the Plymouth High School Girls Volleyball Program, #1 Big Red Drive, Plymouth, IN 46563