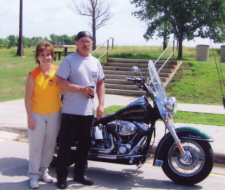 Charles R. “Butch” Kline, Jr., 60, died in Memorial Hospital, South Bend, at 12:35 p.m. on Monday, October 13, 2008. Born in Bremen, IN., on October 14, 1947, Butch was the son of Charles R. and Alene Ritcher Kline, Sr.
He finished the 11th grade at Bremen High School.
On March 6, 1971, in Lakeville, IN., Butch and Kathy A Miller were married.
He was an accomplished and skilled truck driver his whole life, working recently for Indian Trucking.
He enjoyed Harley Davidson motorcycles, stock car racing and having coffee with his buddies. He was a collector of old coins and watches.
Butch is survived by his wife, Kathy, and a son and a daughter. They are Neal A. Kline and Roxanne (Paul Bragg) Kline, all of Plymouth.
His father and a granddaughter, Brittany N. Ross (Kline), Plymouth: a brother, John (Yavonne) Kline and two sisters, Barb (Danny) Grimmer, all of South Bend, and Brenda Kline, Bremen, survive as well. Butch was preceded in death by his mother.
Friends are invited to share stories and memories with Butch’s family on Friday, October 17, 2008, from 5 to 7 p.m., in the Johnson-Danielson Funeral Home, 1100 N. Michigan St., Plymouth, IN. Funeral services for Butch, conducted by the Rev. Charles Krieg, will be held after visitation at 7 p.m., on Friday, October 17, 2008, in the funeral home.
Memorial gifts in Butch’s name may be made to the family.