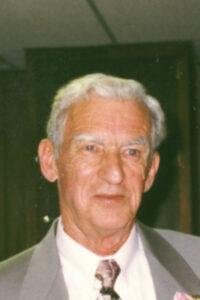 Charles L. “Chuck” Smith, 76, of 11391 Crocus Ct., died of natural causes in Saint Joseph Regional Medical Center, Plymouth, at 10:50 a.m. on Thursday, February 1, 2007.
Chuck was born in Argos, Indiana, on June 3, 1930, the son of Owen and C. Marjorie Long Smith.
He graduated with the class of 1948 from Argos High School.
On June 8, 1950, Chuck and Darle Hughes were married. Darle died in August of 1996. On August 23, 1997, in the Shiloh Wesleyan Church, Chuck and Phyllis J. Tillman were married.
A Marshall County farmer, Chuck worked at the Argos Elevator and managed the Argos Crop Service for 25 years. He then worked for L&H Farm Fertilizer in Bourbon, until his retirement in 1995.
He loved to fish. He was an avid euchre player and enjoyed mowing the lawn, gardening and watching sports.
Especially the sports of his children, Chuck never missed an Argos game when his children were playing.
When his daughter Patti won a full scholarship to Marshall University, Chuck traveled all over the country to see her play
He attended the First United Methodist Church, Plymouth.
Chuck is survived by his wife, a daughter, and two sons and two step-daughters.
His daughter is Patti Smith, Glenwood, West Virginia. His sons are Richard and Kennetta Smith, Argos, Indiana, and Michael and Kathy Smith, Edmond, Oklahoma.
His step- daughters are Kay and Thomas Toll, LaPorte, Indiana, and Diana and Gary Lipply, Plymouth, Indiana. He is also survived by grandchildren Michael and Sherry Smith and Matthew and Dianne Smith, all of Argos, Indiana, and Michelle Smith, Edmond, Oklahoma, and Nathaniel Smith, Los Angles, California.
Step-grandchildren, Maegan and Tyler Toll, Andrew, Whitney, Courtney and Julia Lipply also survive. Great grandchildren Zachery, Alyssa, Isaiah, Kyle, Meagan, Monica, Breanna, Matthew, Kourtney, Kylie and Shauna survive as well together with a step-great-grandson, Brenden.
Friends will be welcomed by his family to celebrate Chuck’s life and share memories at the Johnson-Danielson Funeral Home, 1100 N. Michigan Street, Plymouth, on Monday, February 5, 2007, from 4 to 8 p.m. and after 7 a.m. on Tuesday, February 6, 2007.
Funeral services will be held in the funeral home at 11 a.m. on Tuesday, February 6, 2007. Rev. Dr. Dean Fager, pastor of the First United Methodist Church will officiate.
Burial will be in the Maple Grove Cemetery, Argos, Indiana.
Memorial contributions in Chuck’s memory may be made to a charity of the donor’s choice.