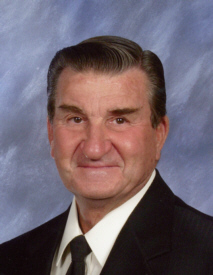 Charles Curtis Allen, 82, Plymouth resident since 2005, went home to be with his Lord and Savior on Friday, February 12, 2016, at Cardinal Nursing and Rehabilitation Center, South Bend.
Curt was born September 5, 1933, in Benton, Illinois, to Oley and Vineta (Gulley) Allen. He graduated from Benton High School in 1950.
He married Doris June Wade on June 5, 1954, in Hammond, Indiana. Together they shared 61 years and to their union came three children: Charles, Kimber and Scott. In 1995 he retired from Midwest Steel, Portage, after fifty years of service as an electrician.
He was a member of the Nazarene Church in Hammond, Indiana, and in Lansing, Illinois. He and Doris have attended Plymouth Wesleyan Church for the past eleven years. Curt was an avid golfer who was an excellent player. He also enjoyed playing softball, riding his motorcycle, playing shuffle board, and bargain shopping at garage sales. He is survived by his wife, Doris, and their children: Charles E. “Chuck” (Denise) Allen, Plymouth, Kimber Lee (Douglas) Vaundry, New Carlisle, and Scott W. (Barbara) Allen, Livermore, CA. Also surviving are his eight grandchildren: Nicholas (Anna) Allen, Rachael (Chris) DeMarse, Jeffrey (Alleigh) Allen, Jessica (Jason) Feathers, Molly (Adam) Chenoweth, Kaleigh (Richard) Stradtner, Nicole Allen, Brett Allen, and 10 great-grandchildren: Lucas, Zoey, Lydia, Thatcher, Mackenzie, Teagan, Skylee, Emery, Dillon, and Cadence. Curt was preceded in death by his parents and a daughter-in-law, Susan Allen. Visitation will be held on Friday, February 19th from 4-8 p.m. EDT in the Johnson-Danielson Funeral Home, 1100 North Michigan Street, Plymouth.
Services will be held at the Plymouth Wesleyan Church, 11203 South Michigan Street, on Saturday, February 20th at 11:00 a.m. EDT with Pastor Ed Friberg officiating. Visitation will continue in the church after 10:00 a.m. until time of services.
Burial will be in the New Oak Hill Cemetery. Memorial gifts may be given to Plymouth Wesleyan Church c/o food pantry or to the Heart to Heart Hospice, 620 Edison Road, Suite 122, Mishawaka, Indiana 46545.