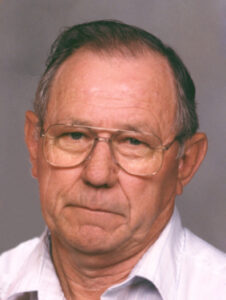 Charles Duane Martin, 86, a King Road resident of Plymouth, passed away in St. Joseph Regional Medical Center-Plymouth Campus, on Tuesday evening, January 8, 2013.
Charles was born on the 8th of August, 1926, in Alfordsville, Indiana, the son of Charles O. and Belvia (Fields) Martin.
He graduated from Alfordsville High School and then attended Tech School where he studied auto body repair.
On July 24th, 1944 Charles entered active duty in the United States Navy and served until July 4th, 1946.
On April 17, 1948, in St. Patrick Church in Montgomery, Indiana, Charles and Alice Emma Walker were married. Alice died on April 12th of 2001. The couple moved from Washington, Indiana to Plymouth in 1949. They spent several winters in the Kerrville, Texas area.
He was a gas serviceman for NIPSCO from 1949 until 1986.
Charles loved to share a good laugh with family and friends. He enjoyed sports and for many years played in the Plymouth Church League on the Knights of Columbus fast-pitch softball team. He along with his wife seldom passed a chance to play golf throughout the country. He attained a hole-in-one while in Texas. Charles was a noted Notre Dame and Green Bay Packer fan.
He held membership in St. Michael Roman Catholic Church, the Knights of Columbus and Plymouth Moose.
Charles and Alice together raised their family of four sons, two daughters and their families. They are: Richard D. and Sherri Martin of Plymouth and children; Shannda, Chad and Jessica, Charles E. and Cathy Martin of South Bend and children; Pamela, Erica and spouse Brian and Sarah, Clifford L. Martin of Port St. Lucie, Florida and daughter Heather and William J. and JoAnn Martin of Bourbon with their children; Alex and Lauren. Mary Anne Martin of Plymouth with sons; Nicholas and Anthony and Susan K. and William Allen of Plymouth and sons; Cord and Jace.
Four great-grandchildren also survive. Charles two siblings; George (Mary Lou) Martin of Michigan and Janet Winniger of Washington, Indiana complete the family.
Visitation will be on Sunday, January 13th from 2 to 6 p.m. in the Johnson-Danielson Funeral Home, 1100 North Michigan Street, Plymouth, IN. A Rosary will be prayed at 5:30 p.m.
A Mass of Christian Burial will be held for Charles on Monday, January 14th at 11 a.m. in St. Michael Catholic Church, 613 North Walnut Street, Plymouth. The Reverend Father William J. Kummer will officiate. Members of American Legion Post 27, Veterans of Foreign Wars – Marshall Co. Post 1162 and the D.A.V. will provide military honors.
Burial will be in St. Michael Catholic Cemetery, Plymouth.
Memorial contributions may be made to the St. Michael School Tuition Assistance Fund c/o Marshall County Community Foundation 2701 N. Michigan St., Plymouth, IN 46563.