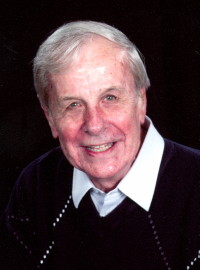 Charles E. (Chuck) Lienhart, 90, entered eternal peace at 8:12 a.m. on Wednesday, July 3, 2019 at Catherine Kasper Life Center in Donaldson.
Born in South Bend, Indiana on December 17, 1928, Chuck was the son of Carl A. and Ruth M. (Carlson) Lienhart. He grew up in Wakarusa, Indiana, where his family owned a furniture store and funeral home. He graduated from high school in 1941 at the age of 16. He also attained his student pilotâ€™s license for small planes at the age of 16. He went on to get his private license. Chuck attended the University of Notre Dame and graduated cum laude in 1949 at the age of 20 with a Bachelor of Music. Chuck was especially fond of his time with the Notre Dame Glee Club.
Chuck served in the U.S. Army until his Honorable Discharge in 1956. Prior to the Army he served in the Indiana National Guard.
During 1989, in Plymouth, he formed Charles Lienhart and Associates, as a State licensed General Appraiser; doing residential, commercial and industrial real estate appraisals. He was a member of the Marshall County Board of Realtors, the Plymouth Chamber of Commerce, he was a State of Indiana Eminent Domain Appraiser and he also did work for the Indiana Department of Natural Resources. He came to Plymouth from Elkhart via Nappanee where he spent some time with Lee Dallas Realty. He served for two years as Vice President of Real Estate and Finance of Skyline Construction, Plymouth, six years as a Vice President in the mortgage loan division of First National Bank of Elkhart and eighteen years as Vice President of the mortgage loan division St. Joseph Valley Bank, Elkhart.
On December 11, 1998 Chuck married Rene D. Williams and they resided in Plymouth until his death.
Chuck had many interests and hobbies throughout his life. His passion was music and he was an excellent pianist; performing in many local venues, both as an individual and in Elkhart as the Chuck Lienhart Quartet. He was an avid reader, as well as, enjoying playing golf, tennis, fishing and sailing. He was a ball room dance instructor at George Davis Dance Studio in South Bend and Elkhart. Chuck never did anything lightly however; as a perfectionist always strived to be the best he could.
Chuck is survived by his wife of 20 years, Rene of Plymouth; daughters, Linda (Jim) Grutza of Minneapolis, MN and Alexis Lienhart of Cookville, TN. Grandchildren, Daniel (Michelle) Moore and Jennifer (Jim) Kenny; and great-grandchildren, Conner and Grace Moore and Chance and Cody Kenny.
He is also survived by his four nephews whom he was very fond of: Tim (Barbara), Rob (Lavonne), Pat (Melody) and Mike (Cathy) Kelley.
He was preceded in death by sons, William â€œChipâ€ A. Carey Lienhart and Eric E. Lienhart, his parents and sister, Bette Kelley.
Visitation will be held on Tuesday, July 9, 2019 from 11-1 p.m. in the Johnson-Danielson Funeral Home, 1100 N. Michigan Street, Plymouth. Funeral services will immediately follow in the funeral home.
Burial will be in the Woodlawn Cemetery in Walkerton, Indiana.
Memorial contributions can be made to Humane Society of Marshall Co, PO Box 22, Plymouth, IN 46563 or the First United Methodist Church, 400 N. Michigan St., Plymouth, IN 46563.