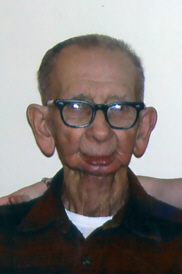 Charles M. Grover, 87, of North Grove Street Argos, passed away at 8:25 a.m. Thursday, November 26, 2009 at his residence after a courageous 40 year battle with cancer. His family remained at his side.
Chuck was born at home in Plymouth, the son of Harry B. and Myrtle May (Smith) Grover on December 21, 1921. He was a lifetime Plymouth/Argos area resident.
On June 25, 1960 in Plymouth he took as his bride the former Dolores M. Pletcher who survives. Together they worked for the Bendix Corporation, Chuck for 30 years as an assembler. They did many things together in their 49 years of marriage like raising two daughters and experiencing their families develop while enjoying the grandchildren and great grandchildren as well as traveling to 49 different states.
Chuck accomplished various activities in his life; like his solo flight and pilot’s license from Plymouth Municipal Airport, playing the steel guitar and organ, gardening large patches of ground including success with pear trees and grape vineyard. He also enjoyed fishing, completing jigsaw puzzles and assisting with tasks at the upholstery shop.
He is survived by his wife Dolores, two daughters; Donna L. (Dwight) Hite of Culver and their children; Nicole, Travis and Cody and Barbara A. (Bruce) Pearson of Argos and their families; Kristin (Tony) Lidgard and April (Adam) Tener along with great-grandchildren; Morgan Hite, Kalei Carlton and Riley Tener.
A sister-in-law; Maxine Grover of Plymouth also survives with several nieces and nephews.
He was preceded in death by his parents, two brothers; Marvin and his wife Edith Grover and Lester Grover.
Visitation will be held on Sunday, November 29, 2009 from 1 – 3 p.m. in the Johnson-Danielson Funeral Home, 1100 N. Michigan St. Plymouth where services will be held at 3 p.m. on Sunday with the Rev. Leonard Jackson officiating.
Burial will follow services in the Poplar Grove Cemetery, on State Road 10 west of Argos.
Memorial gifts may be made to the Center for Hospice and Palliative Care, 112 S. Center St., Plymouth, IN 46563