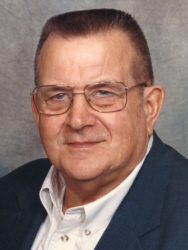 Former Plymouth City Councilman, Charles E. “Chuck” Ripley, 81, passed away suddenly Monday morning in his home of natural causes.
Chuck was a native of Adams County, Indiana and was born at home in Blue Creek Township near Decatur on April 12, 1932, the son of Leland A. and Midge C. (Davis) Ripley. He was one of nine children in the Ripley household and graduated from Pleasant Mills High School in the Class of 1950. He was active in the Basketball and 4H Programs as well as helping on the farm day to day.
He served his country during the Korean Conflict in the U.S. Army from 1952 – 1954.
On April 15, 1956 in Huntington, Indiana, Chuck took as his bride the former Norma Louise Chattin. They were blessed with three sons and their families. They are: son Michael and wife Susie Ripley of Indianapolis, IN and Mike’s children; Elliott, Melinda, Michelle, Jessica, Eric, Jared, and Hannah, son Mitchael and wife Lori Ripley of Greenwood, IN and children; Amanda, Rachael and Anthony, son Mark and wife Diane Ripley of Bradenton, FL and children; Heather and Holly. Three step-grandchildren and three great-grandchildren complete the family.
His siblings include: Enid J. Roberts of Columbus, IN, Marcus J. (Penny) Ripley of Decatur, IN, Thomas M. (Arvilla) Ripley of Lexington, KY, Michael K. (Emily) Ripley of Ft. Wayne and Pauline (Marvin) Joray of Wentworth, SD. Two sisters-in-law; Betty Ripley and Sue Ripley both of Decatur also survive along with numerous nieces and nephews.
He was preceded in death by his parents and three brothers; David, Roger and John Ripley.
Chuck had a strong faith and was active in the First United Methodist Church in Plymouth and a lifetime member of the Union United Methodist Church in Adams County. He was a longtime member of Rotary International.
He also had a lifetime automotive interest, from ensuring their repair as a claims adjuster, supervisor and regional claims manager for Indiana Farm Bureau Insurance from which he retired after 41 years, to parting them out as salvage with Indiana’s largest ‘legal’ junk yard, Superior Auto in Logansport and Bedford, Indiana. Chuck had served on the Board of Directors of I-CAR in the 70’s – 90’s, a past board member and State President of Indiana Auto Recyclers, Past Pres. of Ft. Wayne Adjusters Assoc. and member of the South Bend Adjusters Assoc. He had served on the Board of Directors for I-ACT (Indiana Anti-Car Theft Committee) and was the head of the Legislative Sub-committee for I-ACT and lobbied in Washington D.C.
Chuck served the Plymouth community as a three-term City Councilman of the 1st District, three terms as Chairman of the Solid Waste District, served on the City Insurance Committee and Center Township Advisory Board for eight years.
Friends may call at the Johnson-Danielson Funeral Home, 1100 N. Michigan St., Plymouth on Thursday, October 17th from 3-8 p.m. Visitation will continue at the Zwick & Jahn Funeral Home, 520 N. 2nd St., Decatur, IN on Friday, October 18th from 5-8 p.m.
Funeral services will be held in the Union United Methodist Church, Co. Rd 650E south of State Road 124 in Adams County at 10 a.m. Saturday, October 19th.
Burial will follow in the Tricker Cemetery in Blue Creek Township. Military honors will be accorded Chuck by members of the American Legion Post 43.
In lieu of flowers, memorial gifts are suggested to a Hospice Chapter or Rotary International Club of your choice.