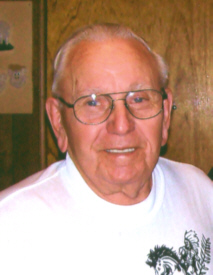 Charles T. Ottow, 82, a Marshall county resident all his life, passed away at 7:24 a.m. on Saturday, March 23, 2013 at the Hospice House of South Bend..
Charles was born in Knox, Indiana on December 8, 1930 to Max Albert Carl and Anna Maude (Hapner) Ottow. He attended Ober Elementary School until the 8th grade.
On June 9, 1951, Charles married Velma Rose Samuels in Donaldson, Indiana.
Charles was enlisted into the U.S. Army on October 6, 1953 and served during the Korean War. He was honorably discharged on October 3, 1955.
He was an operating engineer for 50 years of road work and building trade and a member of the Local 150. He also was a truck driver for Coke-a-Cola for eleven and a half years. He was a member of the Eagle Creek Church.
Charles is survived by three children: Ronald (Heidi) Ottow of Knox, Virginia (Barry) Beaman of Georgia, and Michael (Lisa) Ottow of Plymouth; a son-in-law, Vince Sallee of Knox, 7 grandchildren and 9 great-grandchildren.
He was preceded in death by his wife, Velma, his parents, two daughters: Barbara Ottow and Katherine Sallee; brothers: Max and Cecil, and sisters: Elnora and Berthana.
Visitation will be from 4 – 8 p.m. on Tuesday, March 26, 2013, in the Johnson-Danielson Funeral Home, 1100 N. Michigan Rd., Plymouth.
Funeral services will be at 11:00 a.m. on Wednesday, March 27, 2013, in the Johnson-Danielson Funeral Home. Burial with Military Honors provided by members of the Plymouth American Legion Post 26, Veterans of Foreign Wars-Marshall County Post 1162 and the D.A.V. will be in New Oakhill Cemetery.
Memorial contributions can be made to the Center for Hospice Care 112 S. Center St. Plymouth, IN 46563.