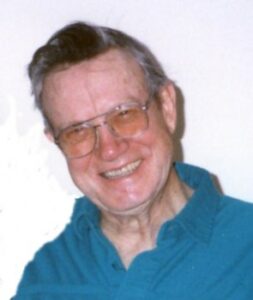 Charles W. King, 79, a lifetime Marshall County resident, residing at 12483 Tyler Road, Lakeville, Indiana, died, following a short illness, at 1:45 p.m. on Wednesday, March 14, 2007, in Florida Hospital, Heartland Division, Avon Park, Florida. Charles, a winter resident of Avon Park, had volunteered for many years at the hospital where he died.
He was born in Bourbon Township on March 5, 1928, the son of Harry Wallace and Fay (McCollough) King. He attended Inwood grade school and graduated from LaPaz Jr/Sr. High School with the class of 1946.
As a member of the U.S. Army, he served during the Korean Conflict from 1950 to 1952.
On March 23, 1952, in Lakeville, Charles and Virginia M. Radabaugh were married.
He worked at Wheelabrator Corp. in Mishawaka, for 27 years, retiring in 1991. He then worked part time at Hall’s Hardware in LaPaz.
A family man, he especially enjoyed following his grandchildren’s activities. He did some traveling and appreciated Gospel, Big Band and Old Country music and remained active with his church’s endeavors. Charles loved Western movies, especially with John Wayne. He was an avid reader and enjoyed games like scrabble and playing cards with his family.
A member of the County Line Brethren Church for over sixty years, Charles was a Deacon, a Sunday School teacher and a local, state and national Brethren Laymen Officer.
He was a past 4H Board member and North Twp. Woodwork leader.
Charles is survived by Virginia, his loving wife of nearly 55 years and their four children, two sons and two daughters. They are: Ralph Edward and Pam King, Indianapolis; Russell Charles and Sylvia King, Wooster, Ohio; Evelyn Mae and Darrell Smiley, Rockville, Indiana; and Emily L. and David Russell, Bremen, Indiana.
Nine grandchildren also survive, together with three sisters and a brother.
Sisters are: Carol and Larry Verrill, Indianapolis; Doris and Harold Barnett, Fort Creek, Kentucky; Sara and Rudy Grumbacher, Indianapolis and a brother Glen and wife Wanda King, Kokomo, Indiana.
Charles was preceded in death by his grandson, Bryce Andrew King, three sisters; Anna Montague, Phyllis Markwith, Rowena Kemery and a brother Malcolm King.
Friends will be welcomed by the family to celebrate the life of Charles King on Sunday, March 18, 2007, from 2 to 7 p.m. in the Johnson-Danielson Funeral Home, 1100 N. Michigan St., Plymouth. Calling will continue at the church one hour prior to services.
Funeral services for Charles will be held in the County Line Brethren Church, U.S. 31 & Tyler Road, Lakeville at 2 o’clock on Monday, March 19, 2007. Pastor Larry Hansen will officiate.
Burial will be in New Oakhill Cemetery, Plymouth.
Memorial gifts in Charles’ memory may be made to the County Line Brethren Church, Shipshewana Brethren Retreat or Gideon’s International.