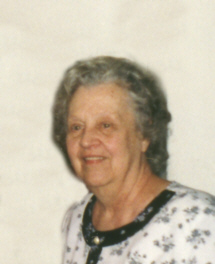 Charlotte A. Jagminas, 91, died of natural causes at her home, 712 Nueva Gorda, Culver, Indiana, on Friday, February 16, 2007.
Formerly of Chicago, Illinois, she was born March 4, 1915, as the daughter of Sylvester and Katie Galinski Kostecki. She went to school through the 8th grade.
In 1936, she was married to Alexander T. Jagminas. Alexander died on October 24, 1980.
For 25 years, Charlotte was a salad maker. She worked for Rocheloo Salad. She retired in 1973.
She was a member of St. Georgia’s Church in Chicago.
She is survived by a daughter and two sons.
Her daughter is Charlotte Brettin, Culver, Indiana and her sons are Sylvester “Bill” and Vicki Jagminas, Franklinton, Louisiana, and Robert and Lillian Jagminas, Chetek, Wisconsin.
Charlotte was preceded in death by two sisters and two brothers. They are Helen Pilatouskas, Anna Kostecki, Sylvester Kostecki and Christopher Kostecki.
Funeral services will be held at St. Casimir Cemetery, Chicago, Illinois, on February 20, 2007, at 11 a.m.