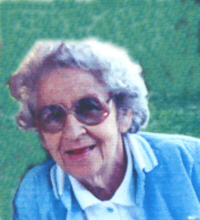 Charlotte L. Gustafson, 87, formerly of 811 Division St., LaPorte, Indiana, died at 7:35 p.m. on Saturday, January 7, 2006, in Miller’s Merry Manor, 730 School Rd., Culver.
She was well-known and loved in LaPorte by many people.
Charlotte was born in Kouts, Indiana, on April 29, 1918. She was the daughter of Adolph and Katherine Knoll.
On May 15, 1937, in Valparaiso, Indiana, Charlotte and Herbert Gustafson were married. Charlotte worked as a waitress for the Stan Leonard Steakhouse in LaPorte before becoming a homemaker, maintaining her home and raising her sons.
She was an exceptional cook and was known for making the best vegetable soup around. She enjoyed sharing as much as she did cooking foods.
She was a great seamstress and crocheted beautiful afghans.
Charlotte had a deep love of animals –especially her three dogs: Snowball, Benji and Flicka, as well as her cat, Mickey.
Squirrels were known to frequent her home where they were spoiled with shelled walnuts, sometimes even eating them out of her hand.
Charlotte is survived by one son: Donald and Linda Gustafson, Bristol, Indiana and seven grandchildren. They are: Tammie and James Radican, Plymouth; Beth and Tom Kollars, Plymouth; Jan and Mary Lee Gustafson, Jr., Plymouth; David and Angie Gustafson, South Bend; Dan and Kelly Gustafson, Granger; Doug Gustafson, New Carlisle and Lonnie Gustafson, California.
She is also survived by six great-grandchildren: Kailey and Kara Gustafson, Plymouth; Christian and Ian Radican, Plymouth and Adam and Anna Gustafson, Granger, Ind.
Charlotte was preceded in death by her parents, her husband and three sons: Herbert, Jr., Gary and Jan Gustafson.
A graveside service will be held on January 11, 2006, at 9 a.m. in the Fair Cemetery, North Liberty, Ind. The Rev. O’Dell, Chaplain of the Southern Care Hospice, will officiate.
Memorial contributions in Charlotte’s memory may be made to the Marshall County Humane Society.