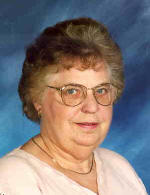 Charlotte J. “Char” Boomershine, a Plymouth resident since 1973, died at 2:30 p.m. Sunday, July 21, 2002 at Saint Joseph Regional Center, Plymouth . Char grew up in the Dayton , Ohio area, moving from there to Texas , where she lived for ten years before moving to Plymouth . Born in Lewisburg , Ohio on June 13, 1933 , Charlotte was the daughter of Clarence R. and Minnie A. Roselius Geeting. She graduated from Lewisburg High School in 1951; she then continued her education at Miami University , Oxford , Ohio , where she received a B.S. Degree in Education in 1955. She continued her studies at Indiana University , South Bend , where she received her Masters Degree in 1982.
On June 17, 1956 , Charlotte and Donovan E. “Don” Boomershine were married in Lewisburg , Ohio .
Char was a schoolteacher for many years. The last seventeen years of her teaching career were at Lincoln Junior High, Plymouth , from which she retired in 1998. After retirement, she was able to spend more time with her grandchildren, whom she adored. She spent a lot of time sewing. She enjoyed making and mending clothes, and doing crafts and decorative sewing. Char also enjoyed playing Bridge. An active member of the Calvary Lutheran Church , Plymouth , Char was also a member of the Delta Theta Tau Sorority. Don, her husband of 46 years, two sons, two daughters and their families survive her. Her children are; Brett and Stephanie Boomershine of Plymouth, Jeff and April Boomershine and their daughters Katie and Emily, all of Fishers, IN; Jill and David Kluszczynski and their sons Ryan and Nathan, all of South Bend, IN; Ann and Brent Sobierajski and their children Sam and Beth, all of Fishers, IN. A brother and sister-in-law, James F. and Elsie Geeting of Eaton , OH , and two nephews also survive. Charlotte was preceded in death by her parents and a sister, Dorotha Farrenkopf. A time of visiting and sharing memories of Charlotte’s life will be from 4 to 8 p.m., local time, Tuesday, July 23, 2002, in Johnson-Danielson Funeral Home, 1100 N. Michigan St., Plymouth, IN, and also at the Calvary Lutheran Church on Wednesday, one hour prior to the service. Funeral services for Charlotte will be held on Wednesday, July 24, 2002 , at 11:00 a.m. local time, at the Calvary Lutheran Church , 1314 N. Michigan St. , Plymouth , IN. The Rev. Steven J. Resner, pastor, will officiate the service. A graveside service will be held on Thursday, July 25, 2002 at 2:00 p.m. local time, at the Sugar Grove Cemetery , New Lexington , Ohio . Memorial gifts in Charlotte ’s name may be made to the Calvary Lutheran Church Building Fund.