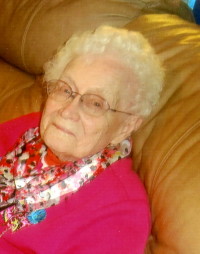 Charlotte J. Brychta Moerke, 98, passed away in Sunday, January 5, 2020 at Loyola Hospital in Chicago, Illinois.
Born January 13, 1921 in Chicago, Illinois, Charlotte was the daughter of Arthur H. And Charlotte (Nelson) East. She graduated high school in 1939 from Evanston Township in Illinois and went on to attend Northwestern University.
On September 15, 1945 in Evanston, Illinois, she married Frank S. Brychta. To this union came two children, Frank and Mary, and many memories. He would proceed her in death on September 16, 1971.
Moving to Bourbon, Indiana in 1978, Charlotte married John W. Moerke on November 3, 1979. He would pass on October 13, 1997.
Charlotte was a loving housewife and enjoyed raising her children. She also work for the Illinois Bell Telephone company as a long distance operator.
She was a member of the First United Methodist Church in Bourbon, until she moved to Plymouth 29 years ago. She then attended St. Thomas Episcopal Church in Plymouth and Atwood Christian Fellowship. She was also very active in Real Services and made friendships wherever she went. She had a heart of gold and a smile to match.
Charlotte is survived by her son, Frank S. Brychta and wife Michelle of Chassell, MI and daughter, Mary Wood Border and husband Jerry of Bourbon; grandson, Scott (Denise) Graham, 2 great-grandchildren and 3 great-great-grandchildren.
She was preceded in death by her husbands, Frank and John, her parents and her brother, Richard East.
A Celebration of Life will be held at 1 p.m. on Thursday, January 9, 2020 at Johnson-Danielson Funeral Home, 1100 N. Michigan Street, Plymouth. Visitation will be held from 11-1 p.m. in the funeral home.
Burial will be in the New Oak Hill Cemetery, Plymouth.
Condolences may be sent to the family through the website: www.johnson-danielson.com