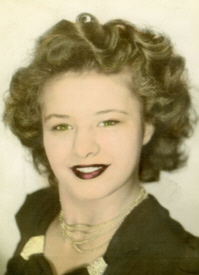 Charlotte M. Ferra, 82, formerly of Cleveland, Ohio, passed away at 9:55 a.m. on Tuesday, July 8, 2014 in the home of her daughter and son-in-law’s, Margaret and Robert Malone.
Born January 14, 1932 in Cleveland, Ohio, Charlotte was the daughter of James and Josephine (Witlickie) Valtman.
Charlotte worked as a cashier in a Cleveland bakery for many years and every year decorated the storefront window for the holidays. There was never a face nor a donut order she forgot. She was also very involved in the Slovenian Home, a neighborhood club, volunteering for many fundraisers. She loved the Home’s clam bakes, a time for polka dancing and times with friends. Charlotte was also a great bowler, and enjoyed being a member of bowling league at the Wickcliffe Lanes in Cleveland.
Charlotte was a lady that was always on the go and loved being outside. Every year she saved up her money to take all her grandchildren to Florida for a two week long vacation. She is survived by her son, Andrew (Maryann) Miller of Willoughby, OH and his children, Mandy (Mark) Hansen and Jessy (Chris) McGinnis, and her daughter, Margaret (Robert) Malone of Plymouth, and her children Adam (Megan) Jasin and Charlene (Chase) Shafer. Her great-grandchildren are: Gabe, Mark and Michael Hansen, Elijah and Julianna McGinnis, Nolan Jasin, and Noah and Savannah Shafer. Also surviving is her former husband, James Miller of Sparks, NV and sister-in-law, Barb Valtman.
The family would like to extend a special “Thank You” to Mary Podlogar, Weldon Scaife, Helen Trochech, Douglas Jasin and Chuck Seymour for showing love and support to Charlotte throughout her life, especially in these last few years.
Charlotte was preceded in death by her husband, Frank Ferra, sister, Shirley Scherer and two brothers, James “Whitey” and Charles “Buddy” Valtman.
As per Charlotte’s request, there will be no funeral services.
Notes of condolence may be sent to the family through the web-site: www.johnson-danielson.com