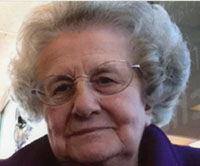 Charlotte May Skiba, 88, a former 37 year resident of Oak Lawn, Illinois, passed away Sunday evening, August 16, 2015 at the Catherine Kasper Life Center located at The Center at Donaldson where she has resided since 2004. Charlotte was born in Chicago, Illinois on March 20, 1927 to Joseph and Frances (Szymanski) Skiba. She graduated High School in 1945 from Saint Augustine Catholic High School in Chicago, Illinois.
Charlotte was a secretary for 38 years at Acme Steel Company in Riverdale, Illinois before retiring in 1984. She was well known as a hard working woman who did all she could do to enjoy life, help others and remain a loyal White Sox fan. Her Faith and good health was always important to her. She is survived by her sister Leonore “Lee” (the late Alfons) Dolezak of Mokena, Illinois, her niece Lenore (Michael) Boyle of Mokena, Illinois, her two nephews Douglas (Chris) Dolezak of Oak Lawn, Illinois and Alan Dolezak of Oak Forest, Illinois, her great nephew Jason (Robbyn) Dolezak and her great niece Kimberly (Tony) Anzilotti.
Charlotte was preceded in death by her parents. Visitation will be held on Wednesday, August 19th from 10 – 11 a.m. EDT in the Mother House Ancilla Domini Chapel, 9601 Union Road, Donaldson.
A Mass of Christian Burial will be held Wednesday at 11 a.m. EDT in the Ancilla Domini Chapel with Fr. John Zemelko officiating.
On Friday, August 21st a Mass of Christian Burial will take place at 10 a.m. CDT in St. Mary Catholic Church, 19515 115th Avenue, Mokena, IL., where visitation will be held from 9:15 – 10 a.m. CDT. Services in Illinois will be held under the direction of the Vandenberg Funeral Home, 19604 Wolf Road, Mokena, IL. Burial will follow in the Resurrection Cemetery 6620 Archer Avenue, Justice, Illinois. Memorial contributions can be made to the Poor Handmaid of Jesus Christ Development Fund, P.O. Box 1 Donaldson, IN 46513.