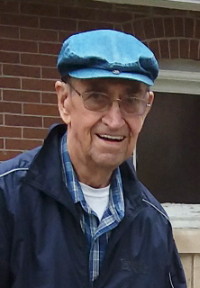 Chester W. Sroka, 88, passed away at his home with family by his side at 8:02 a.m. on Monday, February 11, 2019.
Born in Chicago, Illinois on October 31, 1930, Chester was the son of John and Mary (Zdebski) Sroka, being the youngest of five. He graduated from Harrison Tech High School in Chicago with the class of 1945. Shortly after, Chester was drafted into the U.S. Army and proudly served his country during the Korean Conflict until his Honorable Discharge in 1953.
In Chicago on April 16, 1955, Chester married a sweet lady by the name of LaVerne Ann Cholewa. The couple made their home in the Chicago area while raising five children. Chester worked for R.D. Thiel until his retirement in 1991, and was a member of the Chicago District of Carpenters. After retiring, the couple moved to Plymouth where they were members of St. Michael Catholic Church. He was also a member of the American Legion Post #27. He enjoyed bowling, golfing, fishing and travel. He always took pride in his family, his work and his home.
Chester is survived by his children: John and Gail Sroka of Bridgeview, Illinois, Bruce and Cindy Sroka of Romeoville, Illinois, Roger Sroka of Lyons, Illinois, Tracie Sroka of Plymouth and Kelly and Richard Smith of Crystal Lake, Illinois. Also surviving are his eleven grandchildren, eleven great-grandchildren. Chester also leaves behind his beloved canine companion, Koby.
He was preceded in death by his wife in 2016 and his parents.
Visitation will be held on Monday, February 18, 2019 from 5-8 p.m. in the Johnson-Danielson Funeral Home, 1100 N. Michigan Street, Plymouth. A Rosary will be recited at 7:30 p.m.
Mass of Christian Burial will be held at 11 a.m. on Tuesday, February 19, 2019 at St. Michael Catholic Church, 613 N. Center Street with Fr. Craig Borchard officiating.
Burial will be in the St. Michael Catholic Cemetery, Plymouth with Military Honors provided by members of the American Legion Post 27, Veterans of Foreign War- Marshall County Post 1162 and Disabled American Veteran Chapter 42.
The family expresses deep gratitude to Heartland Hospice for their care and compassion they provided to Chester until the end of his journey.
In lieu of flowers, memorial contributions can be made to the Alzheimerâ€™s Association 225 N. Michigan Ave. Floor 17, Chicago, IL 60601 or the Humane Society of Marshall Co, PO Box 22, Plymouth, IN 46563.