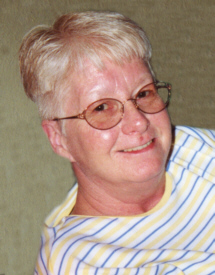 Christine Sue “T-Shirt” Taylor, 66, walked into the arms of Jesus Friday, October 16, 2015 in her home, with her children and her husband by her side. Chris was born the daughter of Oscar and Carol (Eckhart) Swathwood on March 2, 1949 in South Bend. She graduated from LaVille High School in 1967.
On December 22, 1969 in Delphi, Indiana, she became the wife of Ronnie C. Taylor, who survives. They became the parents of two children: Jeremy and Carrie Ann. Chris proudly served in the United States Navy from 1967-1970, where she was a Yeoman. She started on the Eptolant base, and also retired from there. Chris was in charge of all the ships coming and leaving the base. Chris and Ronnie met while both being stationed at Eptolant Base, in Norfolk, VA. When she met Ronnie, she out-ranked him by one rank and she never did let him forget that. Chris had worked at Fairmont Homes in Nappanee as a front desk receptionist. Prior to that, she worked for Bremen Public Schools as a secretary while Jeremy and Carrie Ann were students at the school.
She was a very caring person, who enjoyed sending birthday cards, encouraging letters to her family and many friends, and recognizing special events that took place. Her thoughtfulness knew no bounds. She loved keep-ing in touch with her friends through Facebook. She was loved & adored by all who knew her and were blessed recipients of her thoughtfulness. She and Ronnie loved cats, and had four that were considered part of the family. Chris also said her “happy place” was going to Mackinac Island. She attended The Talma Church “Along the Tippecanoe River,” pastored by her childhood friend Don Nunemaker.
Surviving is her husband of forty-five years, Ronnie C. Taylor, Bremen, son and a daughter-in-law; Jeremy and Carrie Taylor, Grayson, Georgia, daughter; Carrie Ann Taylor, Charlotte, North Carolina, four grandchildren; Matthew, Nathan, Andrew, and Charlotte Taylor. Also surviving are two brothers and sisters-in-law; Pete and Kris Swathwood, Rob and Lylah Swathwood, all of Bremen. Also surviving are several nieces and nephews.
Preceding her in death were her parents. Visitation will be on Thursday, October 22, 2015 from 3-7 PM EDT in the Johnson-Danielson Funeral Home, 1100 N. Michigan Street, Plymouth.
Funeral services will be held at 11:00 AM EDT on Friday, October 23, 2015 in the funeral home with Pastor Don Nunemaker officiating. Military Honors provided by members of the American Legion Post 27, Veterans of Foreign Wars- Marshall County Post 1162 and D.A.V. following the funeral at the funeral home. Private burial will be held at a later date at the Bremen Cemetery. Memorial contributions can be made to the Marshall County Humane Society, 11165 13th Rd, Plymouth, Indiana 46563.