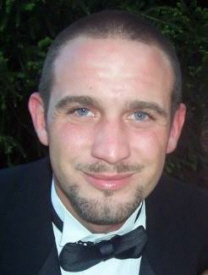 CHRISTOPHER D. LOWDER
May 13, 1984 – November 1, 2013
KNOX- Christopher D. Lowder, 29, passed away in a tragic accident at 2:50 a.m. on Friday, November 1, 2013 in Plymouth, Indiana.
Born in May 13, 1984 in Albemarle, NC, Chris was the son of Phillip D. Lowder and Debra Enriquez.
Shortly after attaining his GED at the young age of 17 Chris joined the U.S. Army and traveled to many states.
While living in Tennessee, Chris met Jessica Renee Windbigler. From the moment she saw him, Jessica knew he was “the one”. The couple got married on December 6, 2010 in Rensselear, Indiana.
Chris was currently working for Applebee’s in Plymouth, Indiana where he made many new friendships.
Chris and Jessica shared a love for Chicago before they met, which was one of the things that drew them to each other. Their family shared a passion for the Chicago Blackhawks, his other favorites also being the Yankees and the White Sox. But most importantly he loved being with his children and family, they were his life. He captured the moments to keep those memories at any chance he could.
Chris is survived by his loving wife, Jessica of Knox, and their five children: Preston S. and Savannah L. of NC, Nikkolas B. Windbigler of TN, and Carter D. and Makayla J. of Knox; his mother and step-father, Debra and Victor Enriquez of Albemarle, NC; his brother, Jesse Enriquez of FL; his sister, Jenny Lay and her daughter, Emma Stone, of FL; his materenal grandparents Frances Johnson and Johnny Blackwelder both of Albemarle, NC; his wife’s aunt, Gail (James) Byard of TN; his sister-in-law, Amanda (Ralph) Vena of Crown Point, IN and their children, Zakkary Helderman of Lowell, IN, Trystyn Braith and Romero Vena, both of Crown Point, IN; and numerous nieces, nephews and friends.
He was preceded in death by his father, his paternal grandparents The Heatherly’s, a great grandma Glen Russell and his mother-in-law, Jamie Owens.
A Celebration of Chris’ life will be held on Friday, November 8, 2013 from 4 – 7 p.m. EST in the Johnson-Danielson Funeral Home, 1100 N. Michigan Street, Plymouth. A Memorial service will immediately follow at 7 p.m. in the funeral home. Life Celebrant Roberta Norris will officiate.
Memorial contributions can be made in Chris’s honor to his family.