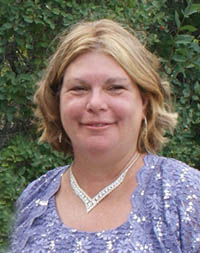 Cindy L. Sherwood, 55, passed away in her home at 10:59 a.m. on Monday February 5, 2018.
Cindy was born in Hilliard, Ohio to Bill J. and Marjorie (Meeker) Hill McCormick. She graduated from Plymouth High School with the class of 1981.
On May 10, 1986 at St. Michael Catholic Church in Plymouth, Indiana, Cindy married James P. Sherwood.
She was a member of St. Mary of the Lake Catholic Church in Culver and former member of St. Michael Church. Cindy helped with funeral dinners at St. Maryâ€™s, and was involved with the â€œWomenâ€™s Connectionâ€ through Stonecroft Ministries.
Cindy was a 9 year member and volunteer of 4-H when her daughters were involved for 14 years, and was a proud band parent with Plymouth High School with her daughters. She was avid in horse showing, winning her class in 1998 at the Quarter Horse Congress. Cindy had her own embroidery business and was a Labrador retriever breeder.
Cindy is survived by her husband of 31 years, Jim of Culver, and daughters: Cassie (Glen) Troyer of Cody, WY and Tabitha Sherwood of Bloomington, IN; her mother, Marge (Charlie) McCormick of Plymouth; step-granddaughter, Bailee Troyer; brother, Roger Hill of Franklin, IN; close family friend, George Gerding and father-in-law, Jim Sherwood of Plymouth.
She was preceded in death by her father, mother-in-law Margaret Sherwood, and beloved horse, Redford Luck aka Bud.
Visitation will be held from 4-7 p.m. on Thursday, February 8, 2018 in the Johnson-Danielson Funeral Home, 1100 N. Michigan Street, Plymouth. A Rosary will be recited at 7:00 p.m.
Mass of Christian Burial will be held at 11 a.m. on Friday, February 9, 2018 at St. Michael Catholic Church, 613 N. Center Street, Plymouth.
Private family burial will take place at a later date.
Memorial contributions can be made to Southern Care Hospice, 1626 E. Day Road, Mishawaka, IN 46545 or St. Mary of the Lake Church, 605 N. Plymouth Street, Culver, IN 46511.