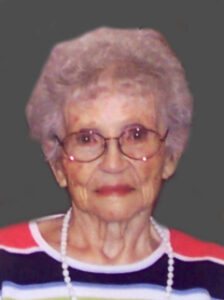 Clara Berneice Baker, 94, a lifetime Plymouth resident, died at 6:00 p.m. on Sunday, April 17, 2011 at Miller’s Merry Manor, Plymouth.
The daughter of Grover and May Coyle Rensberger, she was born on August 20, 1916 in Plymouth. She attended Linkville School.
Clara was first married to Carroll Baker who preceded her in death on February 8, 1957. She then married Cleo Vance Hershberger who preceded her in death on January 15, 1979, and was later married to Dale Baker who preceded her in death on February 24, 2000.
A housewife on the farm, she also worked for over 20 years at American Optical, retiring in 1978.
Clara was a great cook who also loved to crochet, knit.
Clara raised chickens on the farm and the children were treated to farm fresh eggs and a wonderful chicken dinner every Sunday.
She attended Shiloh Wesleyan Church and was a member of the Lakeview Home Ec. Club.
Clara is survived by three sons: Richard (Delores) Baker, Robert (Patricia) Baker and Don Baker, all of Plymouth; one daughter: Mary “Louise” (David) Baker of Portage; 12 grandchildren; 17 great grandchildren; three great-great grandchildren and two sisters: Bessie Snyder and Mary Hostetler.
She was preceded in death by her parents, her husbands, a grandson Michael, a great grandson, Dustin Ronk, four brothers: Henry, Roy, Amos and Carl Rensberger and four sisters: Dorothy Ayers, Nancy Huffman, Vera Shaffer and Martha Wilcox.
Friends may visit with the family on Tuesday, April 19, 2011 from 4 to 8 p.m. in the Johnson-Danielson Funeral Home, 1100 N. Michigan St., Plymouth.
Funeral services, officiated by the Rev. John Perkinson, pastor of the Shiloh Wesleyan Church, will be held at 10:30 a.m. on Wednesday, April 20th, in the funeral home.
Burial will be in Oakhill Cemetery, Plymouth.
Memorial gifts may be made to the Shiloh Wesleyan Church, 10532 4B Road, Plymouth, Indiana 46563 or to the Dustin Ronk Memorial Book Fund, c/o Marshall County Community Foundation, 2701 N. Michigan St., Plymouth, Indiana or the Center for Hospice Care, 112 S. Center St., Plymouth, Indiana 46563.