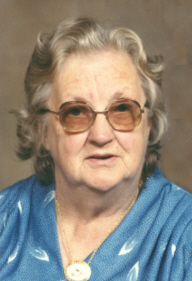 Clara L. Ellis, 88, a former Plymouth area resident, died Tuesday morning, October 4, 2005, in the home of her son and daughter-in-law, Gary and Dianna Ellis, San Antonio, Texas. Clara had been under the loving care of her family and hospice.
Born on February 2, 1917, in Marshall County, Clara was the daughter of William and Eunice Newhouse Thompson. She was a 1935 graduate of Culver High School.
On April 3, 1938, Clara and Marion A. Ellis, Sr. were married in Tippecanoe, Indiana. Marion preceded Clara in death on July 5, 1989.
A homemaker, Clara enjoyed being with her family, and helping Marion on the farm. She enjoyed going to the Whippoorwill Ladies Aid of Marshall County, of which she had been a member for over 50 years. She was an avid game show enthusiast, watching as many as possible on T.V.
Clara is survived by two daughters: Sharon and Tim Schaetzle of Bourbon; Shirley and Dick Farkas of South Bend, and five sons: Larry Ellis and Randy Ellis, both of Plymouth; Terry and Diana Ellis of Argos; Gary and Diana Ellis of San Antonio, Texas and Marion Ellis, Jr. of South Bend. Also surviving are thirteen grandchildren, one step granddaughter, twenty great-grandchildren and two step great-grandchildren, a sister, Dorothy McFarland of Argos, two sisters-in-law: Eudora Blanchard of Indianapolis and Eunice Ditton of Mesa, AZ., a brother-in-law: John F. Ellis of Columbia City, IN and several nieces and nephews.
Clara was preceded in death by her parents and her husband.
Friends will be welcomed to celebrate Clara’s life on Saturday, October 8, 2005, from 10:00 a.m. to 12:00 p.m. in the Johnson-Danielson Funeral Home, 1100 N. Michigan St., Plymouth.
Funeral services conducted by the Rev. Greg Bouck of the Plymouth Wesleyan Church, will be held at 12:00 p.m., Saturday, October 8, 2005, in the funeral home.
Burial will be in Oakhill Cemetery, Plymouth.
Memorial gifts in Clara’s name may be made to the Plymouth E.M.S. and Fire Department.