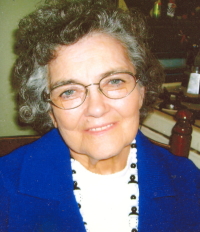 Clara Marie Mason, 90, passed away on Thursday, November 7, 2019, at the Hamilton Grove Nursing Home in New Carlisle, Indiana. Clara was born on September 22, 1929, in Mac Roberts, Kentucky, to Ezekial and Ora (Thompson) Combs. She attended Hindman Kentucky High School and graduated in 1942. She furthered her education at the University of Kentucky for two years. On October 14, 1995, she married James Earl Mason in Michigan City, IN. The couple resided in Michigan City and later moved to Argos, IN. James preceded her in death in 2008.
She worked as a unit clerk for Memorial Hospital in Michigan City. She was an accomplished seamstress and made choir gowns for her home church. She enjoyed reading, especially her Bible. Clara was always active in keeping herself busy and enjoyed decorating. Clara was a Jehovahâ€™s Witness for greater than fifty years, a member of the Kingdom Hall in Rochester and then South Bend.
She is survived by her sons, Benjamin (Janice) Fuller of Canton, GA; Warren â€œKirbyâ€ Fuller of Plymouth, IN; James (Kristin) Fuller of Michigan City, IN; Step-Children, Carla (Matthew) Leake and Tammy Mason; Siblings, David Combs, Irene Wuebker, and Ruby Jean (Charles) Jones; numerous grandchildren and great-grandchildren, nieces, nephews, and other relatives also survive. She was preceded in death by her husband James Mason, her parents Ezekial and Ora Combs, her son Ernest Fuller, her brother Clyde Combs, her sisters Sara Brink, Aileen Richie, and Alice Fiedler. Visitation will be held on Tuesday, November 12, 2019, from 11 a.m. until 1 p.m. at the Johnson-Danielson Funeral Home, 1100 N. Michigan St., Plymouth. Funeral services will follow at 1 p.m.
Memorial gifts in Claraâ€™s name may be made to the Humane Society of Marshall County, PO Box 22, Plymouth, IN 46563