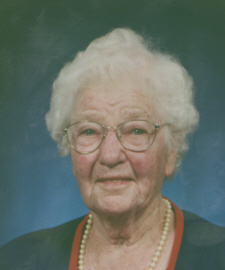 Clara T. Baker, a lifetime Marshall County resident, died unexpectedly at 5:35 a.m. of natural causes on Sunday, March 18, 2007, in Saint Joseph Regional Medical Center, Plymouth. She was 93 years old.
Clara, the daughter of Fredrick and Sadie Rieken Huge, was born in White County, Indiana, on Christmas Eve, December 24, 1913.
She was a 1931 grade of West High School.
In her parents’ home in West Twp., on the 21st of May, 1933, Clara became the bride of Delbert R. Baker. Delbert, following a week shy of 65 years of marriage, died on April 2, 1998.
A homemaker, Clara helped her husband on their farm and did housekeeping for others. She enjoying sewing and gardening.
A member of the Shiloh Wesleyan Church, Plymouth, Clara had taught Sunday School for 20 years and she was very active in the Mission Society of the Church..
She is survived by two beloved sons and daughters and their spouses. They are: Harold W. and Josephine Baker, Plymouth: Keith M. and Ines Baker, Buchanan, Michigan: Dorothy and Gilbert Berrier, Bremen, Indiana and Jeanette and Robert Vermillion, Lakeville, Indiana.
Ten grandchildren and two step grandchildren also survive along with 13 great-grandchildren.
A brother and sister-in-law, Paul S. and Norene Huge and a sister, Mabel Musser, all of Monticello, Indiana, survive as well.
Clara was preceded in death by her parents, her husband and three sisters: Dorothy Berger, Edna E. Cleveland and Louise Shively. Two brothers have also died: Fred Huge and August Huge.
Friends are invited to come and celebrate the life of Clara Baker with her family from 4 – 8 p.m. on Thursday, March 22, 2007 and continuing after 7 a.m. on Friday, in the Johnson-Danielson Funeral Home, 1100 N. Michigan St., Plymouth, and at the church on Friday, one hour prior to services. Funeral services for Clara will be held at 11:00 a.m. on Friday, March 23, 2007 at the Shiloh Wesleyan Church, 10532 4B at King Road, Plymouth, Indiana. The Rev. John Perkinson, pastor of the church, will officiate.
Interment will be in the Bremen Cemetery, Bremen, Indiana.
Memorial gifts in Clara’s memory may be made to the Shiloh Wesleyan Church.