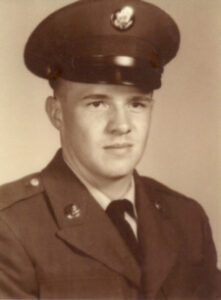 Clayton E. Klingerman, 64, formerly of Bremen, passed away suddenly at his Rochester home Friday evening, April 15, 2011 due to an apparent heart attack.
Clayton was born in Bremen, the son of Chester Earl and Catherine Elma (Williams) Klingerman on October 18, 1946. He was raised on the farm where he came to appreciate the outdoors, livestock and animals of all kinds. He graduated from Bremen High School with the Class of 1964.
In April of 1966 he was drafted and began a tour of duty in Vietnam with the 10th Infantry – Fifth United States Army. After returning home he continued with farm work.
On September 5, 1970 in St. Dominic’s Church he married Theresa K. Clauss also of Bremen. Together they would have three children.
In August of 1985 he fulfilled his desire to become an auctioneer by completing the Reppert School of Auctioneering in Decatur, Indiana. During his career he specialized in livestock sales and horse trading mainly in the Shipshewana area. He enjoyed caring for animals.
With his family he had attended St. Michael’s Church in Plymouth, enjoyed fishing with his sons and horseback riding trips in Brown County.
He was a member of the Indiana Auctioneers Association.
Clayton is survived by his former spouse; Theresa K. Klingerman of Bremen, his daughter; Sarah K. Klingerman of Plymouth and two sons; Clinton E. Klingerman of Plymouth and Nathan E. Klingerman of Rochester with whom he made his home. He was also a close father figure to Zach Feltner of Knox, Indiana. One brother; Chester E. “Skip” and his wife Media Klingerman of Plymouth also survives.
He was preceded in death by his parents and a sister; Catherine E. Ernsberger.
Visitation will be held on Wednesday, April 20, 2011 from 5 – 7 p.m. in the Johnson-Danielson Funeral Home, 1100 N. Michigan St. Plymouth. Services will be conducted at 7 p.m. with Life Celebrant – Roberta Norris.
Military Honors will be provided by members of the Plymouth American Legion Post 27, V.F.W. and D.A.V. immediately following the service.
Interment will be in the Bremen Cemetery.
Memorial gifts may be made to the Marshall County Humane Society P.O. 22, Plymouth, IN 46563, United Way of Marshall County, 2701 N. Michigan St. Plymouth, IN 46563 or Toys For Tots.