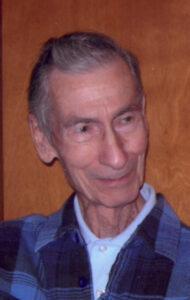 Clayton L. Bowman, 86, a resident of Lincoln Highway in Plymouth since 1978, passed away Wednesday evening, April 18th, 2012 in the St. Joseph Regional Medical Center – Plymouth Campus of natural causes.
He was born at home in Marshall County Indiana at rural Linkville. His parents were Dellmer W. and Perma L. (Kaufman) Bowman.
Clayton attended Plymouth’s Lincoln High School until joining the United States Navy on March 16th, 1944 and served as a Quartermaster Third Class on the USS CEBU a merchant repair vessel. He was honorably discharged on February 16th, 1946. Much later he and his wife Lois would organize the first CEBU reunion held in Plymouth with 45 servicemen. This would continue in various locations for the next 11 years. After the service, he worked at Ball Band in Mishawaka, the McCord Corporation and Schlosser Brothers – Hawthorn Mellody Ice Cream in Plymouth. He will be most remembered for his community service as a Postman as a foot carrier and after 25 years retiring from the Plymouth Post Office as a mail clerk.
He enjoyed woodworking crafts, upholstering furniture and fishing. Clayton was a longtime volunteer with the American Red Cross – Marshall Co. Chapter. He was a member of the V.F.W. and American Legion Posts and a former member of the Plymouth Kilwinning Masonic Lodge.
On December 24, 1943 in Plymouth, Clayton married his now former spouse V. Ruth Bowen, together they would have a son and two daughters.
He then married Lois E. (South) Bollinger on October 8, 1977 in Plymouth, she survives along with his children: Jerry K. (Nancy) Bowman, Pat R. (Dale) Leech and Lynette M. Crowe all of Plymouth. Four step-sons and two step-daughters also survive. They are: Terry L. (Marilee) Blubaugh of Georgetown, Texas, Dan H. (Rebecca) Bollinger of West Lafayette, Ind., David A. Bollinger of South Bend, Jon L. Bollinger and Elizabeth A. (Charles) Braun both of Indianapolis, Ind. and Lisa L. Bollinger of Fishers, Ind. Sixteen grandchildren and seventeen great-grandchildren survive as well.
Clayton was preceded in death by his parents, a brother; Darrell K. Bowman, a stepson; Tim L. Blubaugh and a grandson; Robert L. Blubaugh.
Visitation will be held on Sunday, April 22nd from 2 – 5 p.m. in the Johnson-Danielson Funeral Home, 1100 N. Michigan St. Plymouth. Services will be held at the funeral home on Monday, April 23rd at 11 a.m. The Rev. Ed Friberg of the Plymouth Wesleyan Church will officiate.
Burial will follow in the New Oakhill Cemetery, Plymouth with Military Honors provided by members of the Plymouth American Legion Post 27, Veterans of Foreign Wars, Marshall County Post 1162 and the D.A.V.
Memorial gifts may be made to the American Red Cross, Marshall County Chapter, 215 W. Garro Street, Plymouth, IN 46563