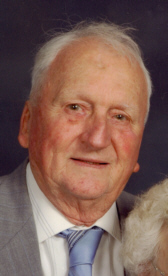 Clem Fox, 85, died unexpectedly at his West 9th Road residence on Tuesday, April 26, 2011 at 11:50 p.m. due to natural causes.
He was born on September 27, 1925 in Monterey, Indiana one of fourteen children from the union of Frederick W. and Elizabeth (Winter) Fox. He received his elementary education at St. Anne’s Holy Family School and continued at Monterey High School.
On May 8, 1944 he entered active duty in the United States Army during WWII stationed in Central Europe. His tour would end on May 22, 1946 as a Tech 5 having received a Purple Heart and two Bronze Stars.
Clem had contact with farming his entire life. After the war he worked on the farm at Ancilla Domini where he met his future bride Anita T. Glose. As Clem would put it, he married the “boss’ daughter”. Clem and Anita were married in St. Michael’s Church on May 3, 1950 and next Tuesday would have celebrated 61 years together.
For over 22 years Clem worked for the Plymouth Community School Corporation. He performed custodial work and could fix or repair anything. His longest assignments were at West School and then ending at Washington School retiring in 1996. Clem, alongside his wife Anita have continued to provide for the volunteer care of the grounds of St. Michael Parish along with various projects over their many years of membership and will be greatly missed.
He has also maintained a large garden at their residence which is home to Marshall County’s only functional round barn that they have proudly kept restored and whose efforts received a Wythougan Valley Preservation Council Award in May of 2006.
As a member of St. Michael Roman Catholic Church, Clem had been a member of the Holy Name Society.
Clem is survived by his wife Anita and their four children and two grandsons. They are: Charles C. (Teresa) Fox of Plymouth and their sons; Brendan M. Fox of West Point, NY and Declan P. Fox of Evanston, Illinois. Lorraine A. (Mark) Brattoli of Ft. Wayne, Indiana, August F. (Patti) Fox of Brooksville, Florida and Sr. M. Rosaria Fox of the Poor Clare Monastery in Palos Park, Illinois.
Surviving brothers and sisters include: Mary E. Ziegler, of Balton, TX, Roseann (Karl) Master of Monterey, Carl W. (Mary) Fox of Plymouth, Rev. Thomas Fox of Remington, IN, Donald (Eldona) Fox of Logansport, IN, Richard (Judy) Fox and Kenneth (Ruth) Fox all of Plymouth and James (Wanda) Fox of Rochester, IN along with numerous nieces and nephews.
He was preceded in death by his parents, and five brothers; Robert, Paul, Theodore, Ralph and Lloyd Fox.
Visitation will be held on Friday, April 29, 2011 from 3 – 8 p.m. in the Johnson-Danielson Funeral Home, 1100 N. Michigan St. Plymouth where the Rosary will be recited at 7:45 p.m. The Mass of Christian Burial will be celebrated at 11 a.m. on Saturday, April 30th in the St. Michael Catholic Church, 613 N. Center St. Plymouth. Officiating will be the Revs. Thomas Fox and William Kummer.
Burial will follow in the St. Michael Cemetery at the corner of W. Harrison and Oak Drive in Plymouth. Military Honors will be accorded Clem by members of the American Legion Post 27, VFW, D.A.V. and South Bend Honor Guard Unit.
Preferred are memorial gifts to St. Michael Parish in lieu of flowers.