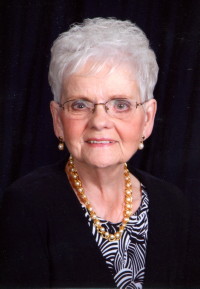 Cleo Jean Magnuson Albert Shidler, 89, died at 1:02 p.m. Thursday at home in LaPaz, Indiana.
Cleo was born July 28, 1929 in Greensburg, Kansas to the late Carl S. and Hattie B. (Nelson) Magnuson.
Cleo met Dale L. Albert in high school, and they married on January 25, 1947. They had two daughters, Sharon and Susan, four grandchildren, and nine great-grandchildren. She is survived by Sharon (Don) Balka and Susan (Tim) Good. She is also survived by grandchildren, Steve (Amy) Balka, Paige (Dirk) Anderson, Jason (Beth) Good and Danielle (Brad) Kertai. She is also survived by nine great-grandchildren, Elizabeth and Katelyn Balka, Sydney (Michael) Sliter, Jacob and Michael Good, Alexis (Austin) Perkins, Ethan, Isabella and Alaina Kertai. Dale passed away on March 23, 1992. She was a member of the LaPaz High School Class of 1947. She loved to work with hair and was very creative. She graduated from Premier Beauty College with a cosmetology degree and worked as a hair stylist at Silhouette Salon with her daughter, Susan. Cleo and Dale were self-employed and jointly operated Albertâ€™s Bowling Lanes in LaPaz for 40 years with his brother and sister-in-law, Bob and Shirley Albert. Cleo was a member of Calvary Baptist Church in LaPaz. She loved working with children and helped with Good News Club for years. She loved being with family, doing crafts, painting, and was an avid gardener. She was a member of Happy Homemakers County Extension Club.
On January 26, 1996, Cleo married Robert L. Shidler in LaPaz, IN, who survives along with two step-children to Cleo; Brian (Kathy) Shidler of Mishawaka, IN and Amy Ward of Fort Wayne, IN. She is also survived by six step-grandchildren; Tony, Cory, Danielle, and Michael Shidler and Rachel and Jared Ward.
Also surviving are two brothers, John (Mary) Magnuson of Sebring, FL, Ralph (Treva) Magnuson of Sebring, FL, and two sisters-in-laws, Shirley (Ivan) Magnuson of Plymouth, IN and Shirley (Robert) Albert of LaPaz, IN, along with many nieces and nephews. She was preceded in death by her parents, three brothers; Carl Magnuson Jr., Ivan Magnuson, and Norman Dale Magnuson, brother-in-law, Robert Albert and two sisters, Wanda Lemert and Alta (Elvin) Kime. Visitation will be held from 4-6 p.m. on Monday, February 25, 2019 at the Johnson-Danielson Funeral Home, 1100 N. Michigan Street, Plymouth. Funeral services will follow at 6 p.m. with Pastor Rob Keck officiating.
Interment will be in the New Oak Hill Cemetery, Plymouth.
In lieu of flowers, memorials may be made to Calvary Baptist Church P.O. Box 238, LaPaz, IN 46537 or Center for Hospice Care 112 S. Center St. Plymouth, IN 46563.