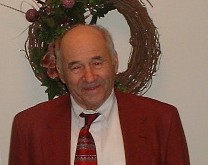 Cletus L. “Pete” Berger, 999 US31, LaPaz, died on December 2, 2005, at 4:10 a.m. , one day after his 88th birthday, from injuries sustained in an automobile accident on November 26, 2005 at the intersection of US 31 and 6th Road. He died in Parkview Hospital, Fort Wayne, Indiana.
Born in LaPaz, Indiana on December 1, 1917, Pete was the son of Elmer E. and Jennie M. Seltenright Berger.
He graduated from Lapaz High School with the class of 1936
A self-employed farmer for most of his life, Pete and Jacqueline M. Bienz were married in LaPaz, Indiana, on June 4, 1939
He enjoyed raccoon hunting and was an avid sports spectator; He enjoyed watching basketball, football, racing and baseball.
Cletus was a former member of the Marshall County Dairy Association, and a former council member of the Marshall County 4H. He was a member of The House of the Prayer, once known as the Old Time Religion Tabernacle.
Cletus is survived by his wife and their five children, two daughters and three sons.
His daughters are: Lucinda K. and Dale Aukerman, South Bend, Ind; Pamella A and James Smith, Hesperia, California.
The sons are: Timothy O. and Susan Berger, South Bend, Indiana, Thomas L. and Sandra Berger, South Bend, Indiana, Jefferey A. and Cheryl Berger, Plymouth, Indiana.
A family adopted Son, Derry Dillion and his wife, Chris survives as well, Warsaw, Indiana
14 grandchildren, 20 great-grandchildren, and 6 great – great – grandchildren also survive together with three sisters: Vera and Fred Kinzie, Toledo, Ohio; Evelyn Lappin, North Liberty, Indiana, and Laura and Frank Kleinke, Avon Park, Florida.
Cletus was preceded in death by his parents and two brothers, Noble and Wayne Berger, and a grandson, Randy Berger.
Friends will be welcomed to celebrate the life of Cletus Berger at the House of Prayer United Pentecostal Church, 12450 Plymouth-Goshen Trail, where he was a member, on Monday, December 5, 2005, from 2 to 4 p.m. and 6 to 8 p.m.
Funeral services for Cletus will be held in the House of Prayer at 11 a.m. on Tuesday, December 6, 2005. Pastor Ronald D. Humphrey and a grandson, Marty Spurlock will officiate.
Burial will be in New Oakhill Cemetery, Plymouth, Ind.
Memorials to the life of Pete Berger may be made to the Marshall County Hospice or the United Pentecostal Church House of Prayer.