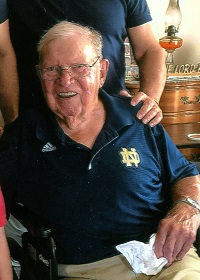 Clifford Ferguson, 97, passed away Saturday, March 9, 2019 in his Plymouth home surrounded by his loving family.
Born and raised in Marshall County, the son of farmers Charles and Fern Ferguson, Clifford learned to love working the land, as well as the value of hard work done with humble hands. As the fourth child of nine, Cliff enjoyed growing up with his siblings on their farm on the Yellow River and had fond memories of time spent with his family.
Shortly after his graduation from Argos High School, he joined the Army Air Corps, becoming a member of the 80th Air Depot Group. In this role, he helped repair and service planes in Bombay, India during WW2.
In 1946, Clifford took a job working for NIPSCO as a lineman and general line foreman, for over 35 years, retiring in 1981. In 1948, he married Marian Deden and they began a family, first with Tim and later with Kris. Yet, Marianâ€™s health failed, and she passed in 1964. Clifford found love again with Barbara, and his family grew by three as her sons, Terry and Ron, joined the family fold.
In his retirement, both he and Barbara enjoyed crafting. Many of Cliffordâ€™s woodwork and craftsmanship adorn the homes of folks across the country. In fact, each year for 30 years, the couple would journey to sunny Texas to spend their winters in the southwest warmth creating and selling their art.
Surviving is his wife of 53 years, Barbara; two sons, Tim Ferguson of South Bend, IN and Ron (Linette) Hawkins of Houston, TX; one daughter Kris (Steve) Palbykin of Tempe, AZ; two brothers Lloyd (Linda) Ferguson of Chandler, AZ and Floyd (Carol) Ferguson of Plymouth, IN; 9 grandchildren and 11 great-grandchildren, as well as many other family members and friends. He was preceded in death by his parents, Charles and Fern Ferguson; his son Terry Hawkins; his sisters Violet Ham, Bernice Ott, and Marjorie Albright; his brothers Melvin Ferguson, Robert Ferguson and Donald Ferguson. Visitation for Clifford will be held on Tuesday, March 12, 2019, 10:00 A.M. at the First Presbyterian Church, 401 N. Walnut St, Plymouth, IN. The Memorial Service will follow visitation at 11:00 A.M. with Rev. Dr. Ron Hawkins officiating. Interment will take place at 1:30 P.M. at the New Oak Hill Cemetery with Military Honors. Memorials may be directed to the Boys & Girls Club of America, 314 E. Jefferson St. Plymouth, IN 46563 or the Center for Hospice Care (Plymouth location) at 112 S. Center St. Plymouth, IN 46563 in lieu of flowers.