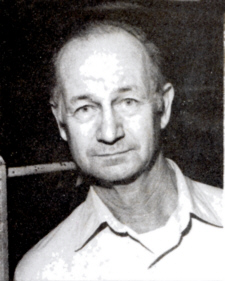 Lifetime area farmer Clifford Revere Berger Sr., 90, passed away at his home in the care of his family on Friday, April 24, 2009 at 5:40 p.m. Clifford was born at home on March 26th 1919, the son of Paul R. and Berneice A. (Casper) Berger. He was a graduate of LaPaz High School with the Class of 1937.
On November 8, 1941 he took the former Lauretta May Gilbert as his bride and together they worked the farm, raised three children and witnessed the birth of four grandchildren, four great grandchildren and one great great grandchild over a period of 67 years at each others side.
Their children are: Carol Jean Benson, Clifford Revere Berger Jr. and James Paul & Margaret Berger all of Plymouth. Grandchildren are: Robert G. & Tami Benson, Christine A. & Mathew Lotter, Jason P. & Jenny Berger and Kimberlee M. Berger with great grandchildren: Amanda Benson, Andrew Benson, Carissa Lotter and Jacob Berger along with great great granddaughter: Alaina Worland.
Also surviving is his sister Ruth C. and husband Bernard Schrome of Plymouth including several nieces and nephews. Preceding in death was his sister Helen L. and husband Robert Kirkley. In addition to farming, Clifford worked as a welder for Pi Rod Tower Co., Wheelhorse and Wheelabrator-Freye Corporation retiring in 1981.
His interests included flying his J-3 Piper Cub, gardening and travel. He was a member of Flying Farmers, Wythougan Preservation Council, Plymouth Moose Lodge, Hoosier Old Wheels and Farm Bureau.
The family will receive friends on Monday April 27th from 4 – 8 p.m. in the Johnson-Danielson Funeral Home, 1100 N. Michigan St. Plymouth and after 7 a.m. Tuesday until services at 10:30 a.m. in the funeral home. The Rev. Ogden “Sam” McClimans, pastor of the LaPaz Community Church of God will officiate.
Burial will follow in the Bremen Cemetery.
In appreciation of the care and guidance offered by the Center For Hospice and Palliative Care, the family requests memorial gifts to their program c/o 112 S. Center St., Plymouth, IN 46563 or charity of the donor’s choice.