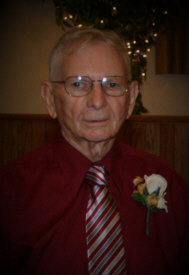 Clifton J. Wringer, 91, life-long resident of Walkerton, Indiana, passed away at 5:00 AM Tuesday, May 17, 2016 in the Pilgrim Manor, Plymouth, Indiana.
He was born December 26, 1924 in LaPorte, Indiana, to the late Forrest and Nellie (Goode) Wringer.
Clifton graduated from Hamlet High School. On June 3, 1949 in LaPaz, Indiana, he married Dorothy Lillian Rough; she preceded him in death on July 12, 2011.
Clifton was a factory worker for White Farm in South Bend, Indiana. He was a member of the Community Church of God, LaPaz, Indiana, and was an avid gardener and enjoyed putting jigsaw puzzles together. Surviving are three daughters; Karen and Jim Byrer of Bremen, Wanda and Randy Roberts of Shreveport, LA and Deneen and Kirk Weldy of Marco Island, Florida. Also surviving are his grandchildren; Wendy (Brad) Douglass, Lisa (Shaun) Sauer, Matthew (Melia) Byrer, Amanda Sewell, Michael (Bonnie) Roberts and Rachael Weldy, four great-grandchildren, and a sister; Lydia Bartley of South Bend, Indiana.
He was preceded in death by his parents, wife, and two brothers; Earl and Jim Wringer.
Friends are invited to share memories with Clifton’s family from 4-7 p.m. Thursday, May 19, 2016, at the Johnson-Danielson Funeral Home, 1100 North Michigan Street, Plymouth, Indiana, and from 10:00 a.m. until time of service on Friday at the church.
Funeral services will be held at 11:00 a.m. on Friday, May 20, 2016, at the Community Church of God, 601 South Michigan Street, LaPaz, Indiana. The Rev. Sam McClimans will officiate.
Burial will be in the Woodlawn Cemetery, Walkerton, Indiana.
Memorial gifts may be made to the Community Church of God, 601 South Michigan Street LaPaz, Indiana or to the Center for Hospice Palliative Care Center, 112 South Center Street, Suite C, Plymouth, Indiana 46563.