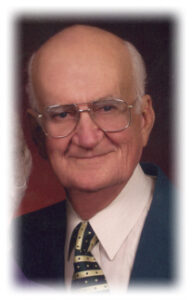 Clyde M. Leary, 81, a resident of Plymouth, passed away at 6:45 p.m. on Saturday evening, February 11, 2012 in the Miller’s Merry Manor, Plymouth.
Clyde was born the son of Mose and Mildred (Barry) Leary on March 8, 1930 in Rockford, Illinois. He received his education in Byron, Illinois and graduated in 1948. That same year he entered the Landig College of Mortuary Science in Houston, Texas and worked in funeral service until June of 1950 at which time he enlisted in the military. He first served three years in the United States Navy and then he was assigned to the Marine’s for two years as a hospital corpsman stationed in Korea. He was honorably discharged in June of 1955.
During this time he took as his bride the former Harriet M. (Lannen) York on October 14, 1953 in Fallon, Nevada. They shared 49 years together and became the parents of four children. Harriet preceded Clyde in death on February 28, 2003.
On March 12, 2004 in Plymouth, Clyde married Dorothy A. (Bartlett) Heur who survives.
For several years they owned and operated the Oregon Floral Shop and Byron Monument Co. in Illinois. From 1961 through 1968 he worked in asphalt construction & management. In 1968 he moved his family to Plymouth where he was involved in heavy equipment sales for Ft. Wayne based Reid-Holcomb. From 1978-1986, he and Jerry Greenlee partnered with Hite Equipment which then became known as Contractors Equipment Co. located in Plymouth. In 1979 he started A1 Asphalt Sealers which he operated until his retirement in 1998.
Clyde was a longtime member of the Plymouth First Presbyterian Church and most recently attended the Plymouth Wesleyan Church. He was also a member of the Plymouth-Kilwinning Lodge No. 149 F & A.M. and the Ancient Accepted Scottish Rite – Valley of South Bend.
He enjoyed working with wood and crafted furniture and many keepsake items as well as doing yard work and gardening.
Clyde is survived by his wife Dorothy, two sons and a daughter and their families. They are; Gary P. (Judi) Leary of Plymouth and their children, Candy (Garth) Messer of San Pedro, CA, and Christopher (Kristin) Leary of League City, Texas; Edward W. (Jennifer) Leary and their sons, Edward (Lindie) Leary and Patrick (Angela) Leary, all of Plymouth, Cheri Sheaks of Kendallville, IN and her children; Matthew Sheaks, William Sheaks, Cassandra (Josh) Wiley and Caitlin Sheaks all of Kendallville.
A son, Ian D. Leary who preceded in death is survived by his children, Michelle (Joseph) Manuzza of Elmont, NY and Steven Leary of Byron, IL.
A step-son, Jay Heur also preceded in death but is survived by his wife Beth Heur of Ft. Wayne and their son, Brandin (Lori) Heur of Columbia City.
Eighteen great-grandchildren also survive.
Clyde had one brother, Harold W. Leary who has also died.
Visitation will be held on Wednesday, February 15, 2012 from 4 – 7 p.m. in the Johnson-Danielson Funeral Home, 1100 N. Michigan St., Plymouth. Services will be held in the funeral home at 11 a.m. on Thursday, February 16th with Pastor John Branch officiating.
Interment will be in the New Oakhill Cemetery, Plymouth.
Memorial gifts may be given to the American Diabetes Association, 6415 Castleway W. Drive, Suite 114, Indianapolis, Indiana 46250.