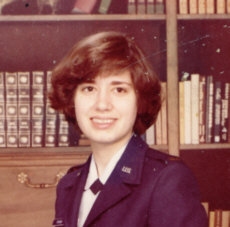 Jane A. Robinson, a Colonel in the United States Air Force, died at Walter Reed Army Medical Center, on May 6, 2008, after a courageous year-long battle with cancer.
Jane was 52-years old.
She had fought a long battle with cancer and, never gave up, even in her final days.
She was devoted to her career in the United States Air Force and to the mission of protecting the United States of America.
She served at the National Reconnaissance Organization, the Pentagon, the Los Angeles Air Force Base, Hanscom Air Force Base, Lehigh University and Wright-Patterson Air Force Base.
Jane was a great co-worker and a mentor to other junior Air Force officers.
Her final duty was as Director of Financial Management and Resource Oversight to SIGINT.
She will be missed but never forgotten by the many friends and colleagues she leaves behind. Her spirit will live on in their hearts.
Born July 3, 1955, in Logansport, Ind., she was the daughter of John Richard and Janet Ann Boyer Robinson.
Raised in Plymouth, Ind., she graduated from LaVille High School and from Purdue University in 1977, and 1979, with Bachelor and Master of Science degrees in aeronautical and astronomical engineering.
Upon graduation, Colonel Robinson attended the United States Air Force Officer Training School, earning her commission as a Second Lieutenant in 1980.
As a young officer, Colonel Robinson held a variety of air and space systems engineering and acquisition positions. In 1993, she transitioned to the financial management career field, distinguishing herself in assignments at Air Force Headquarters, the Joint Staff, and most recently, the National Reconnaissance Office.
Over the course of her 28-year Air Force career, Colonel Robinson was highly decorated, earning the Defense Superior Service Medal, five Meritorious Service Medals and three Commendation Medals. She also received numerous awards and distinctions for excellence in financial and acquisition management.
She was a graduate of Air War College, Air Command and Staff College, Squadron Officer School and earned a Masters of Business Administration degree in Systems R&D Management from Wright State University, Dayton, Ohio.
In addition to her love of the Air Force, Jane had a great passion for animals, especially her cats: Kitty-Boy and Apache. She had a wonderful sense of humor and was a person of impeccably high character, demonstrating the utmost integrity at all times.
She was a loving daughter, sister and aunt and was fiercely loyal to her friends.
Jane is survived by her brother and sister-in-law, Michael and Jennesse Robinson, nieces Alexis, Cassandra, Christina, Cynthia and nephew, John, all of Huntsville, Ala., and by her brother, James, of Plymouth, Ind., and other extended family members.
She was preceded in death by her parents.
A time of sharing with Jane’ family will be held Friday May 16, 2008 in the Johnson-Danielson Funeral Home, 1100 N. Michigan Street, Plymouth, IN from 4p.m. to 8 p.m. Funeral services officiated by her brother Michael A. Robinson will be held at 1 p.m. on Saturday May 17, 2008, in the funeral home.
Burial will be in Oakhill Cemetery, Plymouth, Ind., on Saturday, May 17, 2008. In lieu of flowers, donations in Jane’s memory may be made to the American Cancer Society or to the American Humane Society.