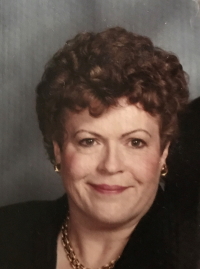 Connie L. Folk, 74, of Plymouth, passed away on Thursday, April 2, 2020 after years of declining health. Connie, the daughter of William and Florence Jones, was born in South Bend on January 26, 1946. Connie married Ken Folk on May 15, 1965 and enjoyed 51 years of marriage before his death in 2016.
Connie grew up in North Liberty, IN and graduated from North Liberty High School in 1964. Connie was devoted to her family and especially loved her grandchildren. She greatly enjoyed playing with them, baking for them or reading a book. Connie loved to cook, garden, decorate, and go antique shopping. Connie attended Calvary Lutheran Church in Plymouth. During her time at the church she cooked and coordinated holiday and funeral meals. She also often took part in the church’s annual ice cream social. She was always willing to help with whatever needed to be done. She is survived by two daughters, Carmen (Dino) Piraccini of Granger and Kelly Arce of Plymouth. Connie has five grandchildren: Andrew, Charlie and Ben Arce, Regan and Brennan Cast, and three step-grandsons: Brandon, Nate and Dominic Piraccini. She was preceded in death by her parents, twin sister Bonnie Jones and brother, William Jones.
Due to the restrictions on social gatherings, there will be a private graveside service officiated by Rev. Eric Ahlemeyer at the New Oak Hill Cemetery, Plymouth.
Memorial contributions can be made to the Preschool at Calvary Lutheran Church, 1314 North Michigan Street, Plymouth, Indiana 46563.