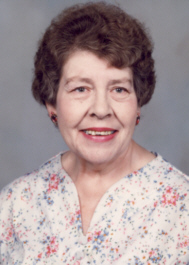 Connie L. McCuddy, 81, passed away at 10 p.m. Thursday, December 9, 2010 in Miller’s Merry Manor – Walkerton. She had formerly resided at Garden Court Downtown in Plymouth. She was a lifetime LaPaz/Plymouth resident.
She was born the daughter of Melvin and Altha (Myers) Wisler on November 25, 1929 in Plymouth. Connie graduated from LaPaz High School in 1947.
Connie was a former member of the Calvary Baptist Church in LaPaz.
She enjoyed reading, family trips to Florida, but especially loved being a grandma to her two grandchildren and two great-grandchildren.
Survivors include a daughter Gail Ann and husband Keith D. Dyer of Lakeville, and a son Robert L. and wife Jody McCuddy of South Bend along with two grandchildren, Kimberly McCuddy with her fiancé, Andy Peterson and Michael Dyer and wife Heather and children Lucinda and Gilbert. Several cousins also survive.
She was preceded in death by her parents.
Friends are invited to share with the family on Sunday, December 12, 2010 from 2 – 4 p.m. in the Johnson-Danielson Funeral Home, 1100 N. Michigan Street, Plymouth.
Services will be held at 1:30 p.m. on Monday in the funeral home with the Rev. Charles Krieg presiding.
Burial will be in the New Oakhill Cemetery, Plymouth and memorial gifts may be made to the American Cancer Society 601 W. Edison Road, Mishawaka, 46545.
The family would like to thank Miller’s Merry Manor for over 11 years of tender care with special thanks to Pat Bluhme, RN; Lori and Doug, Social Services and Tyler V.
Condolences may be sent to the family through the web-site: www.johnson-danielson.com
Funeral Director: Randall L. Danielson