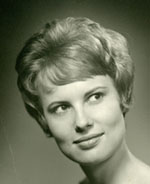 Connie Sue Ball, 74, of Bourbon, passed away peacefully surrounded by her family on Monday, January 15, 2018 at Memorial Hospital of South Bend, Indiana.
Connie was born May 9, 1943 in Mexico, Missouri, to the late Leo and Barbara (Jones) Jones.
She graduated from Centralia High School in 1961.
Connie married Daryl K. Ball on February 14, 1965 in Mexico, Missouri; and he survives.
She and her husband, Daryl, own and operate Ball Auction & Realty Inc of Bourbon, Indiana, where she was the Secretary and Treasurer. They also own and operate 250 acres of farmland in Marshall County, Indiana.
The family has been active in 4-H all of their lives with their two daughters having been 10-year members. Connie was strong in her faith, she was a sports enthusiast, loved antiques, cats, and she was homemaker in her later years.
Surviving is her loving husband of fifty-two years, Daryl K. Ball of Bourbon, Indiana, two daughters; Lisa and Jack Carpenter of Bourbon, Indiana, Lana Ball of Plymouth, Indiana, three grandchildren; Griffyn Carpenter, Lindsey Powell and Quentyn Carpenter. Also surviving is her sister-in-law; Wyvetta Heckhart of Plymouth, Indiana, brother-in-law; Ron Ball of Centerville, Tennessee, and many nieces and nephews. She is also survived by her two close friends; Sue Elliott of Plymouth, Indiana, and Bette Lon Johnson of Leeâ€™s Summit, Missouri.
She was preceded in death by her parents.
In accordance with Connieâ€™s wishes, there will be a private service for immediate family.
Burial will be in the New Oak Hill Cemetery, Plymouth, Indiana.
Memorial contributions may be directed to the Marshall County Humane Society, P.O. Box 22, Plymouth, Indiana 46563, or to the donorâ€™s choice.