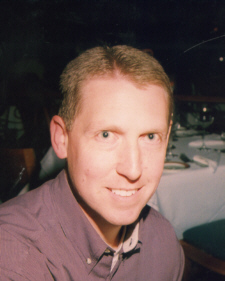 Plymouth native, Craig E. Woolfington, 41, a resident of the Indianapolis/Avon area for the past several years, died, following a brave fight against melanoma cancer, at 9:50 p.m. on Monday evening, September 15, 2008, in the Simon Cancer Center – Indiana University Hospital, Indianapolis.
His enduring strength and courage, his love of life and people touched the lives of all who knew him.
Craig was born in Plymouth, the son of Plymouth residents Michael C. and Jane M. (McCarty) Woolfington, on July 28, 1967.
A varsity basketball player with the Plymouth Pilgrims, he graduated from Plymouth High School with the class of 1986 and from Purdue University.
On August 28th 2004, Craig and Trina Ann Hawley were married in Plymouth.
Craig was the Director of Sales with General Hotels in Indianapolis.
He loved golf, following Purdue football and basketball and playing Fantasy Sports. Most of all he enjoyed eating popcorn with his two-year-old daughter, Kate.
Craig was a member of the First United Methodist Church of Plymouth; the Plymouth-Kilwinning Lodge #149, F. & A.M.; the Ancient Accepted Scottish Rite-Valley of St. Joe, South Bend; Indiana Society of Association Executives; the Society of Governmental Meeting Planners and Meeting Planners International.
Craig’s courage and determination to live was an inspiration to his family and friends.
He is survived by his loving wife, Trina, and their daughter, Kate, both of Avon, Indiana, and by his parents, Mike and Jane, and two sisters: Chris (Jim) Cochern and their children Emily, Lily and Daniel Cochern, all of Plymouth and Lynette Espich, South Bend, and her children: Ashley Gray and Ryan (Amanda) Gray, all of Plymouth .
A great-niece, Emma Konefsky, Plymouth, his in-laws; Terry and Rick Teverbaugh of Mooresville, and Tim and Bobbi Hawley of Noblesville also survive along with several aunts, uncles, cousins and many friends.
Craig was preceded in death by his grandparents: Aileen and Gene Woolfington and Ruth and Robert McCarty.
Friends will be welcomed by the family on Saturday, September 20, 2008, from 3 to 8 p.m. in the Johnson-Danielson Funeral Home, 1100 N. Michigan St., Plymouth.
A Masonic memorial rite will be held at 8 p.m. Saturday in the funeral home.
Funeral services for Craig will be held at 2 p.m. on Sunday, September 21, 2008, in the First United Methodist Church, 400 N. Michigan Street, Plymouth with visitation one hour prior to services.
The Rev. Dr. Dean Fager and Pastor Matt Pickut, both of First United Methodist Church, together with Pastor Judy Fuller of the Daleville United Methodist Church will officiate.
Burial will be in New Oakhill Cemetery, Plymouth.
As an expression of sympathy, those wishing to remember Craig may do so with a gift to the Kate Woolfington Education Trust Fund. Envelopes will be available at the funeral home, church or sent c/o 8638 Holm Mountain Circle, Avon, Indiana 46123