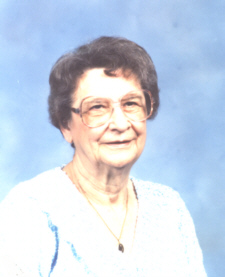 Daisy M. Sutton, a Plymouth resident most of her life, died at 9:29 p.m. Friday, March 20, 2009 in Pilgrim Manor Nursing Center, Plymouth.
Born in Corning, Arkansas on September 7, 1920, Daisy was the daughter of Irving and Pearl Mae Green Ousnamer.
She was a graduate of Lincoln High School, Plymouth.
Daisy was married to Claude Sutton, who preceded her in death.
She had worked as a night clerk at the Plymouth Motel and had also worked at Harvey’s Dime Store.
Daisy had formerly attended First Christian Church and Faith Baptist Church. She was active in Children’s Evangelism at church and a former member of C.C.F. She enjoyed crafts, especially crocheting.
Daisy is survived by three daughters: Barbara A. (Robin) Clutinger, Linda S. Hartney, both of Peru and Pamela K. (Ronnie) Stiles of Plymouth; two sons: Leslie W. Sutton and Daniel A. Sutton, both of Plymouth; eight grandchildren; eleven great-grandchildren; and a sister-in-law: Genevieve Ousnamer of Plymouth.
She was preceded in death by her parents, her husband, one sister; Virginia Youngman and four brothers: Gerald Ousnamer, Virgil Ousnamer, Jack Ousnamer and Winfred Ousnamer.
Friends are invited to share their memories of Daisy with her family at the Johnson-Danielson Funeral Home, 1100 N. Michigan St., Plymouth, from 12 to 2 p.m. on Wednesday, March 25, 2009.
Funeral services for Daisy will be held at 2:00 p.m. on Wednesday, March 25, 2009, in the funeral home. Burial will be in New Oakhill Cemetery, Plymouth.
Memorial contributions may be made to the Parkinson’s Foundation.