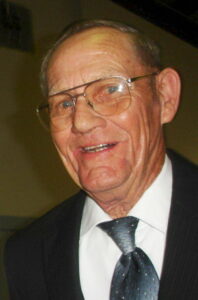 Lifetime Plymouth resident, Dale A. Manuwal, 84, passed away in his home, surrounded in love, on Monday, February 22, 2021.

Born in Plymouth, Indiana on May 11, 1936, Dale was the son of Myrl and Mearlie (McKesson) Manuwal. As a young boy, Dale could be found many days along the river or in the woods harvesting game or fish for dinner. In his mind, the woods and rivers were his school. So, he frequently skipped school to enjoy what he loved, being in nature.

During his high school years, he began logging. He cut, skidded, and hauled for many years. Dale worked for Sanders Lumber Company in South Bend, cruising and marking timber. In 1979, he started his own sawmill in Plymouth, Manuwal Sawmill. He would finish raising his family with that business, and his son, Tim, would become involved in the operations. Through his hard work, the business expanded to 8 buildings. His sawmill also cut the material Dale used to build his family’s home.

Tim worked side by side with his dad for over 40 years. It was Dale’s wish to build his own casket. But running on Manuwal time, Tim was able to complete this project for him instead. It would also be the casket Tim would be laid in when he passed on February 22, 2020.

Dale trapped in Indiana and Arkansas. His top year he trapped 41 coyote, 1 red fox and 1 bobcat. He also took many fishing trips to Canada and pheasant hunting in Iowa and Kansas.

Visitation will be held from 2-4 p.m. on Sunday February 28, 2021 at the Johnson-Danielson Funeral Home, 1100 North Michigan Street, Plymouth.

Funeral services will be held on Monday March 1, 2021 at 11 a.m. in the funeral home with Chaplain Wyatt Smith officiating. Visitation will resume one hour prior. Burial will be in the New Oak Hill Cemetery, Plymouth.