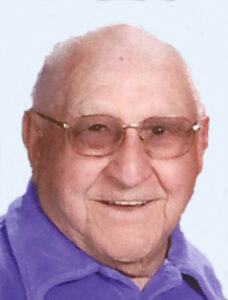 Dale D. Klingerman, 85, a lifetime Marshall County resident, passed away after a brief illness at his home on Monday, January 7, 2013 at 9:58 A.M. in the care of his family and the Center for Hospice Care.
Devoted to his family and his wife, Dale was dedicated to helping others.
Born in Bremen on November 28, 1927, Dale was the son of Albert and Veronica “Roney” (Wozniak) Klingerman.
He attended the Linkville School and graduated from LaPaz High school with the Class of 1945. He served his country in the United States Army during World War II.
On July 8, 1948 in Whiting, IN., Dale and Beatrice “ Bea” M. DeLanghe were married. After nearly 64 years of a loving life together, Beatrice died on May 1, 2012.
Dale was a skilled brick mason for 35 years. He was the owner of Bremen Cut Stone in Plymouth, Indiana. He then established The Saddle Shop located at his home in Bremen in 1986 until the present time.
He enjoyed horses, raising rabbits and was a basketball and Western movie buff.
A member of the Plymouth Wesleyan Church and the Berean Class, he was dedicated to supporting the church’s efforts in the mission fields.
Dale and his wife raised their family of four children. They are: Marsha K. Paul, Argos, Sheryl L. (Dan) Keyser, Bremen, James A. (Traci) Klingerman, Walkerton, Krista S.(Charles) Klockow, Bremen. Fourteen grandchildren, eleven great-grandchildren and several nieces and nephews also survive his passing.
In addition to his beloved wife and parents, two brothers and two sisters preceded Dale in death. They are Lewis E. and Theodore Klingerman and Frances Holderman and Elnora Ames. Two sons-in-law, Edward F. Paul and Mark A. Evans and a grandson, Troy A. Klingerman have also passed.
Visitation will be at Johnson-Danielson Funeral Home, 1100 North Michigan Street, Plymouth on Friday, January 11, 2013, from 5 to 8 P.M. and for one hour prior to funeral services at 11 A.M. on Saturday, January 12, 2013, in the Plymouth Wesleyan Chapel, 11203 South Michigan Road.
The Revs. John Perkinson of the Shiloh Wesleyan Church and Ed Friberg of the Plymouth Wesleyan Church, will officiate.
Full military honors provided by members of the Plymouth American Legion Post 27, Veterans of Foreign Wars – Marshall Co. Post 1162 and the D.A.V. will be accorded to Dale at the New Oakhill Cemetery.
Memorial contributions in Dale’s memory may be made to the Center for Hospice Care 112 S. Center St., Plymouth, IN 46563 or to the Shiloh and the Plymouth Wesleyan Churches.