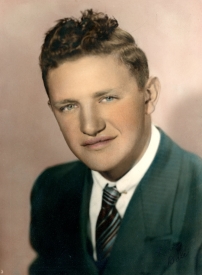 Dale F. Reaker, 91, passed away in Plymouth, IN on Saturday, June 1, 2019, surrounded by his familyâ€™s love.
A lifetime Marshall County resident, Dale was born March 7, 1928, to Carl H. and Nellie A. (Davis) Reaker. He graduated from Bremen High School with the class of 1946.
On May 4, 1951, Dale married a girl he met through the Marshall Co. Rural Youth, Phyllis D. Schaal, in her parentâ€™s home. The couple would cherish 61 years together before her passing in 2012.
A man of many talents, Dale worked for Vic Stockman at Snyder TV Appliance and later started Reaker Refrigeration & Appliance Repair Service until his retirement well into his 70â€™s. Dale â€œnever met a strangerâ€ and has been in most homes in this area handling service calls.
In 1943 Dale set the 100-yard dash track record for Plymouth High School and was a broad jump champion. He continued his track career at Bremen High School from 1944 until graduation in 1946.
Dale is a member of the North Salem Church of God in Plymouth, where he served as church trustee for 50 years.
The couple spent several winters in the Sebring, Florida area. Dale enjoyed woodworking and gardening in his flower, vegetable and fruit gardens. Dale took pride in being the family chef and loved to spend time with his family. He enjoyed creating crafts, giving them as gifts to others, including over 1000 knitted hats for newborns in hospitals. Dale is survived by his three children: Dennis (Beverly) Reaker of Montgomery, Alabama, Beth (Bert) DeVantier of Independence, Kentucky, and Jim (Michele) Reaker of Cincinnati, Ohio.; 4 grandchildren: Melissia Birge, Amber Cox, Tyler Reaker and Austin Reaker; and 5 great-grandchildren.
He was preceded in death by his wife, parents, siblings, Earl, George and Everett Reaker, Jeanette M. Heck, Erma Carpenter and Mary Jane Reaker.
In lieu of flowers the family requests donations to the Dale F. Reaker Memorial Scholarship. This fund was set up by the family in honor of Dale to further the education of a Bremen High school student. Donations can be mailed to Bremen Dollars for Scholars P.O. Box 144 Bremen IN 46506 or Bremen.dollarsforscholars.org
Visitation for Dale will be on Tuesday, June 4th from 4 p.m. until 6 p.m. at the Johnson-Danielson Funeral Home 1100 N. Michigan Street Plymouth, IN 46563. Service will be led by Pastor Bob Collier on Wednesday, June 5th at 11 a.m. also at the funeral home. Burial will follow at the New Oak Hill Cemetery. ***************************************************************
More information about the scholarship can be found at www.Bremen.dollarsforscholars.org Through this scholarship Daleâ€™s family hopes to inspire students to continue their education to follow their dreams.
You can contribute to Dad’s scholarship by mailing a donation in Dale Reakers name to:
Bremen Dollars For Scholars
P.O. Box 144
Bremen, IN 46506
or
Donating at the visitation or service.
or
or visit the web site:
www.Bremen.dollarsforscholars.org