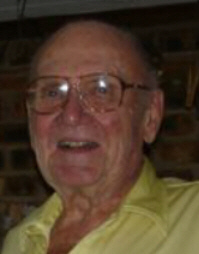 Dalton A. “Dalt” Fehrer, 80, passed away in the company of his family at 12:40 p.m. in the Miller’s Merry Manor, Wakarusa, Indiana after a long battle with duodenal cancer. Dalt has been a resident of Lawrence Lake, Plymouth for the past 44 years.
Born in Beaver Dam, Wisconsin on May 7, 1930, he was the son of Alfred L. and Lilly M. (Raasch) Fehrer. There he received his education and then studied at the University of Wisconsin, Madison.
He then entered the United States Navy on November 8, 1948 and served for four years in Korea as a Radarman Second Class and was honorably discharged on October 30, 1952. Dalt served on the USS Roanoke – Destroyer.
On September 19, 1953 in Madison, Wis. he took for his bride the former Dorothy C. Schanen. She would precede him in death on December 11, 2006.
Dalt worked in sales for Simplicity Manufacturing in Port Washington, Wis and then retired after a number of years with Summit Power of Ft. Wayne, Ind. Following his retirement he then worked as a receiver for Marshall County Bank & Trust Co. and as a greens keeper at Sprig-O-Mint and Swan Lake Golf courses.
He loved gardening and making wine. Gardening included starting many plants from seed. One of his biggest undertakings was his four acre asparagus field and loved every minute of it working with many area grocers and families who looked forward to his spring harvest.
During the 40’s and 50’s, Dalt played tenor sax and clarinet in a jazz band. He was a former member of the Plymouth American Legion Post 27 and Veterans of Foreign Wars Marshall County Post 1162.
Dalt is survived by four of their five children. They are: Sherry A. and Gary Watkins of Newark, Delaware and their children: Michael, Adam, Christopher and Elizabeth; Mary Pat and Jay Jubina Jr. of Morris, Ill. and their children: Tanya, E.J., and Evan; Kris M. and Doug Pedler of Wakarusa, Ind. and their children; Cassidy, Katelyn and Jeffrey; David S. and Carol Fehrer of Plymouth and daughter, Nikki Rumpler. Son Dalton A. “Skip” Fehrer Jr. preceded him in death but is survived by his sons: Nicholas, Timothy and Samuel. Seven great-grandchildren complete Dalt’s family.
Visitation will be held on Thursday, May 5, 2011 from 5 – 7 p.m. EDT in the Johnson-Danielson Funeral Home, 1100 N. Michigan St. Plymouth, IN where services will begin at 7 p.m. The Rev. Charles Krieg will preside.
Burial will be at 10 a.m. EDT on Friday, May 6th in the St. Michael Cemetery with full military honors provided by members of the American Legion Post 27, V.F.W., D.A.V. and South Bend Honor Guard located at the corner of W. Harrison St. and Oak Drive in Plymouth.
Preferred are memorial gifts to the Marshall County Council on Aging – Transportation & Meals on Wheels Programs, 1305 W. Harrison St., Plymouth, IN 46563