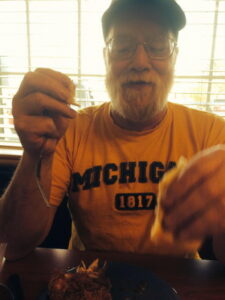 Born on July 19, 1956 in Detroit, Michigan he was the son of Herman and Wilma (Pingilley) Hinton. He attended Thurston High School graduating with the class of 1976.

In September of 1982 he met this wonderful lady Tonda working at the Renaissance Fair in Houston, TX. They had their first date on January 1, 1983 and the rest was history, they were married on December 27, 1983.

Dan worked as a material handler for Compaq Computer for many years before moving to Mentone in 1997. At this point Tonda decided to go to college and Dan decided to stay at home and take care of their kids and the home.

A serious sport’s enthusiast he loved Michigan football, the Detroit Tigers and the Detroit Redwings. He would keep the game stats on every game that was played and he made sure that no matter who was playing he had that team’s shirt or jersey on rooting them on. It would be nothing for Dan to change his clothes 6 times in a day depending on the game he was watching.

He was known as a very loyal, always committed and strong-willed man that would do anything for his family.

Dan is preceded in death by his parents Herman and Wilma.

A celebration of life will be held on a later date.