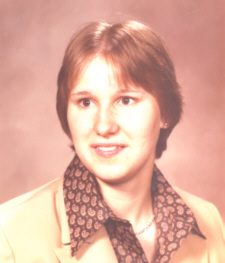 Dana Lynn Rodgers, 47, a lifetime resident of the Knox and Plymouth areas, died Sunday, February 8, 2009, at her residence.
Born in Knox , IN, on September 3, 1961, Dana was the daughter of Donald D. Rodgers and Shirley Bradley Troyer.
She was a 1979 graduate of Knox High School.
Dana loved children. She had worked as a tutor, helping children with their education. She was also an AWANA teacher.
She collected Mickey Mouse memorabilia, liked to draw and enjoyed playing the guitar and piano.
Dana attended the Plymouth Baptist Church, where she was very active in all of the children’s activities.
Dana is survived by her mother and stepfather, Shirley and Robert Troyer of Knox; IN, three sisters: Geniene (Wilber) Collins of Plymouth, IN, Colleen Joseph of Bowling Green, KY and Jennifer (Robert) Cooper of Morristown, IN: and two brothers: Donald (Brenda) Rodgers of Greenfield, In and Herman Rodgers of Knox, IN.
She was preceded in death by her father, Donald D. Rodgers.
Friends are invited to share memories of Dana with her family from 10 to 11 a.m. on Wednesday, February 11, 2009 at the Plymouth Baptist Church, 11345 9A Road, Plymouth.
Memorial services will be held at 11:00 a.m. on Wednesday at the church, with Pastor Douglas Jividen officiating.
Interment will be in Eagle Creek Cemetery, Knox, IN.
Memorial gifts in Dana’s memory may be made to the Plymouth Baptist Church.